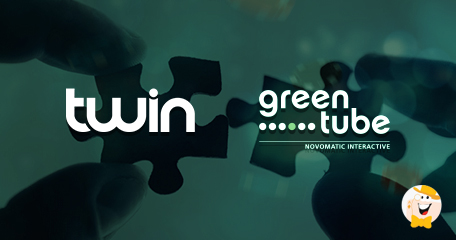 Twin Casino has announced a new partnership, this time with Greentube. The deal will see Twin integrate the latter’s colossal portfolio of games. For lack of a better word, since “colossal” doesn’t even begin to cover it…

Greentube is part of the Novomatic family, also going by the name of Novomatic Interactive. The company, originally named Dürrschmid & Reisinger OEG (that’s a whole lot of names, right?), was established in 1998.

In years to follow, Greentube became a subsidiary of the largest Austrian provider. During the 20 long years of its existence, the business has made Novomatic’s land-based slots available across multiple devices, including desktop and mobile. In addition to it having gone online, the provider also develops its very own products.

Also, the group’s subsidiaries are nearly as numerous as its games, including Funstage, Bluebat Games, Abzorba Games, Cervo Media, Platogo, StakeLogic, alongside company divisions in Malta, Gibraltar, Alderney, and Slovakia.

The partnership is one small step for the iGaming sector, but one giant leap for Twin, to put it poetically. Seeing as the casino has been around only since 2017, this new deal formed so early in its operations is an extraordinary achievement. Twin’s chief brand officer, Marcin Jablonski, seems to agree:

“We have always prided ourselves on building a fully customer centric experience, this not only includes our user-friendly system but our game choice as well, we believe that by announcing this deal with Greentube, we have once more announced ourselves as one of the top new casinos.”

“With our ambitious marketing strategy and continued onsite tweaks and developments, we are certain to continue this rapid rise throughout the remainder of 2018 and into next year” he concludes.

The “rapid rise” is certain to get a considerable boost from the game developer, since it not only has 20 years of experience in the field, but is also a proud owner of numerous titles that can be only described as iconic.

“We are absolutely delighted to add Twin to our extensive partner portfolio. Twin is a fairly new casino and it has already shown great ambitions in the iGaming market. Its market dedication, player focus, and user-friendly system, makes us excited to see Book of Ra Deluxe, Lucky Lady’s Charm, Apollo God of the Sun, and many more titles on their online casino.”

As far as “great ambitions” go, Twin Casino has already built a formidable reputation, chiefly due to it offering high-quality gambling experience. To begin with, their landing page is as straightforward as it gets, with no distractions to be found anywhere in sight.

More importantly, Twin’s incentive programs are one of a kind, with new players being offered a welcome package and an amount of extra spins not to be taken lightly. Any player making at least one deposit qualifies for a monthly raffle that awards an insane amount of bonus cash.

With this latest software add-on, the venue is certain to attract more regulars, on top of enhancing its standing… which appears to already be set in stone.

“Twin Casino has announced a new partnership, this time with Greentube”

@nirvana Hopefully you're one of the ones who likes them :)

ah Novomatic games , you either like them or hate them , no middle ground :D

Hi everyone, Thank you for the messages ;) There's plenty more coming to Twin before the year ends, be sure to stay tuned!

I love Twin! Their promotions are among the best ones out there! And I love Novomatic slots! What I’m trying to say, very inarticulately, is that I for one rejoice at the news!