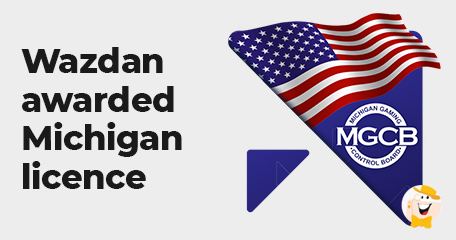 After entering its 18th regulated market at the beginning of March, allowing it to launch 23 best-performing titles in the Netherlands, Wazdan continues to gain new regulatory approvals for key iGaming sectors and enters Michigan, the third state in North America.

The Great Lake State has joined New Jersey and West Virginia as the 19th regulated market for Wazdan, which has enjoyed significant growth in the country over the last year.

A Huge Growth Area for iGaming

The awarding of the third U.S. license comes right after expanding in the Netherlands and the Baltic region.

This market progression will allow Wazdan to launch its array of highly popular video slots in a regulated state whose legislative is on the same page as the one in New Jersey and West Virginia.

The leading casino game supplier from Malta has increased its growth capacity in North America over the last 12 months, especially after signing a major commercial deal with Scientific Games, now known as Light & Wonder.

As stated by Imiolek, the company has worked hard to ensure that all games meet the high standards set by the industry’s regulators in North America. This region of the world is of huge importance for further market growth and Wazdan can’t wait to hit the ground with its content in the upcoming weeks, added the COO.

The studio’s initial release will probably include some of the most popular games in the US, such as Sizzling 777 Deluxe, Lucky Reels, Space Spins, Power of Gods: The Pantheon, Magic Stars 3, Magic Fruits Deluxe, Relic Hunters and the Book of Faith and more.

In recent months, Wazdan Ltd has strengthened its position in Romania, entered Greece and Belarus, marking its 18th regulated iGaming sector to feature 9 Lions, Sizzling 777 Deluxe, and Larry the Leprechaun alongside the incredibly popular Hold the Jackpot series.

However, entering the Netherlands on March 3rd allowed the studio to also roll out its Unique and Special Wazdan features, including the popular customizable Volatility Levels and Buy Feature.

The Dutch market has been among the fastest growing sectors in the industry ever since its framework came into effect on October 1st, 2021.

Andrzej Hyla, chief commercial officer at the company is also proud of reaching the 18th jurisdiction as it serves as a testament to the hard work of the entire team. The studio is looking forward to seeing the impact of its games on operators in the region and hopes to enter new territories in Q2.

Wazdan is doing a really great job, it is very important that you position yourself well in the big markets as they do.

Great news, another license for Wazdan, that is an important step and great achievement. Congratulations!

Wow, Wazdan is serious about expanding in the U.S. this is great news for the market’s future.