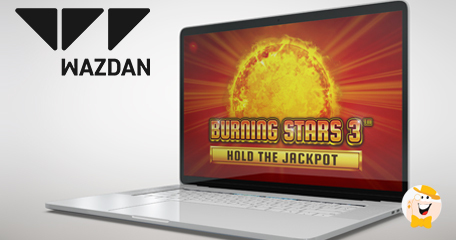 The fast-paced slot with a 3x3 configuration uses a matrix reel layout in which at least four symbols landing on reels will form a winning combo. A will symbol substitutes for all others except the bonus one during the base gameplay.

…which players will trigger once three Bonus symbols land on the single spin.

Hold the Jackpot system keeps any bonus symbols fixed on the reels during the round while the re-spin counts. This begins at three symbols and will reset if a new Bonus symbol lands on the reels.

The session will continue until all nine-reel spots are filled or the count reaches zero. Collecting stars will let players progress through Mini, Minor and Major Jackpots before hitting the Grand Jackpot.

Burning Stars 3 has an RTP of 96.12%, nine paylines and comes with Wazdan’s Volatility feature that lets players toggle between low, standard and high variance.

When players hit more bonus symbols, the reward counter will tick even higher, beginning at 3x and going up as far as 2187 times if players manage to find all nine and trigger the Grand Jackpot.

All the standard Warden features that have become so familiar with players are a part of this game too, and that includes Ultra Lite Mode, Ultra Fast Mode and Big Screen Mode. There is also the very popular Buy Feature included in the game, that lets players buy the activation of Hold the Jackpot bonus at any time.

“Burning Stars 3™ takes our hugely popular Hold the Jackpot feature and makes it centre stage. With four winnable jackpots including the mammoth Grand Jackpot of 2187x a player’s stake, player’s will be able to hugely enjoy Burning Stars 3™.”

Have a look at the official game preview:

“its brand-new thrilling game with Hold the Jackpot feature”

I kinda love to play every once in a while classic style slots. Also, there is a remarkable Jackpot feature, I'm going to try my luck with this one :)

3 x 3 grid and the Hold the Jackpot bonus in one? Well, this is definitely my game. After all, there is the Buy Feature also, can't be better! Wazdan is a company that understands the needs of each player. This game is very innovative and promising! I like it! :)

Fantastic feature! I hope I will catch that Grand Jackpot!