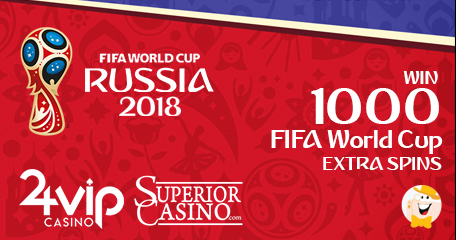 The 2018 FIFA World Cup in Russia is less than a month away now. The football spectacle with 32 nations will take place from June 14th until July 15th and will definitely be this year's major event. A lot of online casinos will be profiting from the sheer popularity of this event, as more and more are coming up with exciting new ways to combine football with the average gambling experience. Two such casinos are Superior and 24 VIP and they have lined up two separate offers that will prove very rewarding.

For the entire duration of the World Cup, new and existing players of these two casinos will be able to play with up to 1000 extra spins on the Global Cup Soccer slot machine by Rival Software! Players who deposit $25 will receive 400 extra spins while those who deposit $50 will receive more than double, for a total of 1000 spins. There is also an additional option to participate in a draw that awards three Android gadgets. It consists of individuals’ predictions of the team who they think will win the World Cup. Those who got it right will take part in the final raffle where winners will be chosen randomly. The draw will be streamed live on Facebook on July 16th.

FIFA World Cup will be taking place in 11 different Russian cities. The best footballing nations on Earth will compete for the 18-carat gold trophy and the title of World Champion. Germany remains a defending champion, and the stage will be set for some of the world's top players like Lionel Messi, Thomas Mueller, Harry Kane, Andres Iniesta and Cristiano Ronaldo to shine again.

Of course the casinos will try to use the moment and benefit from the World Cup popularity but I guess nothing wrong in that especially when they offering the punters a great promos like those two mentioned above. They both sounds great and I'm really tempted to give a shot to at least one of these, the amount of the extra...

Of course the casinos will try to use the moment and benefit from the World Cup popularity but I guess nothing wrong in that especially when they offering the punters a great promos like those two mentioned above. They both sounds great and I'm really tempted to give a shot to at least one of these, the amount of the extra spins sounds quite amazing so..

Very good news for all players. Soon there will come long-awaited days and the beginning of excellent offers. I hope to participate in the action. The main thing is not to miss this event. Thank you for very useful information. Update often so as not to miss.

Many casinos are preparing lots of great promotions for the FIFA World Cup. As always, you'll be able to find out more about them here on LCB. Stay tuned! ;)

Great promotion! I’m pretty sure that we can expect more and more promotions before world cup starts ;)

Such a great offer from these two casinos, especially for football fans :)

This is a great promotion. I'm looking forward to participating. I really like both Superior and 24VIP Casinos. Though, I have not played in a while, but may proceed to make my next deposit, hoping to win with a withdrawal. Thank you for the article.