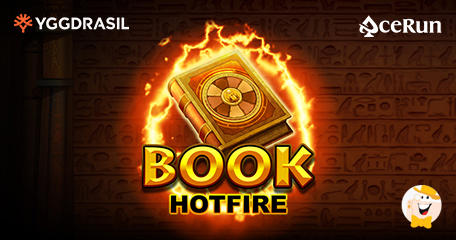 While Yggdrasil’s long-standing content partners continue to deliver groundbreaking slots with incredible features each week, a new promising name shows up on scene.

To deliver the hottest Egyptian themed slot of the Summer, AceRun had to unite with this superior provider of online gaming solutions and out of their mutual efforts, a scorching new title for August was born, called Book HOTFIRE.

By using a high volatility math model, the classic book-style slot is taking players on a journey where they must collect sacred scriptures to trigger up to 6,440x their stake. This is AceRun’s debut title as part of the YG Masters program, so let’s take a closer look.

To get the young studio’s first game ever rolling, you must focus on three or more book symbols. If they land anywhere on the reels, you automatically get 10 complimentary spins. Moreover, before you get to the bonus round, there is a wheel of fortune to be spun – whichever symbol you get here will make it special and it will stick around for the entire duration of the feature.

As an additional treat from the software studio Yggdrasil, the special symbol selected via the wheel will expand to cover all three positions of the reel throughout the bonus.

Of course, if three or more book symbols land again during this stage, players will automatically retrigger the feature. As the game description reveals, it is possible to have an unlimited number of spins with even higher cash prizes, so give it your best shot!

As announced earlier, Book HOTFIRE is the first slot produced by AceRun. This is the latest boutique studio to join the YG Masters initiative. It was introduced to the iGaming industry a few months back, and its Egyptian-themed debut will also be powered by GATI.

“Egyptian-themed slots have been a mainstay within iGaming for many years now, and players know and love them,” commented Stuart McCarthy, head of product and programs at Yggdrasil.

He is thrilled about adding another top-class book-style game to the YG Masters portfolio and AceRun will fit in nicely. McCarthy is also excited about working closely with the up-and-coming studio, destined to create some new fantastic gaming experiences.

Meanwhile, Jeroen van der Heijden, head of development at AceRun, said that all the slots released through the YG Masters program in the past are incredible and impressive. The studio is proud to become part of the roster by releasing Book HOTFIRE and he hopes that its sleek and modern design will deliver timeless gameplay for years to come.

Have You Seen Monsters VS Gigablox?

Released on 1 August, the latest project between Yggdrasil and ReelPlay, called Monsters VS Gigablox, sees an epic battle of monstrous proportions. The action in this game takes place across a devastated city and showcases enormous creatures fighting across the 6x6, 50-payline grid.

If you see a golden crown anywhere on the board, it will step in as a wild to substitute, while the ‘VS’ symbol is a scatter. However, you will need five or more of these symbols to trigger up to 40 complimentary rounds, but wins in this stage are huge.

All Gigablox symbols in the bonus are Monsters only, while all wins containing wilds or the champion are doubled. Give it a go and come back to tell us your opinion.

“Book HOTFIRE is the first slot produced by AceRun”

This is just next-level, I mean the complexity of graphics and sound effects is truly worthy of every admiration and praise. Nicely done, looking forward to seeing some more.