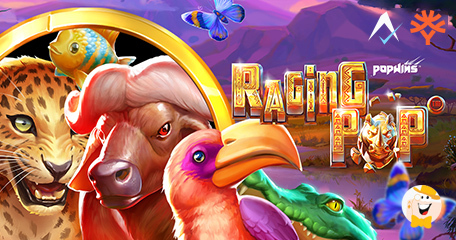 Following the huge success of CherryPop™, BountyPop™, TikiPop™, HippoPop™, and other action-packed releases with popular mechanics, Yggdrasil and AvatarUX have prepared one more surprise for its players. The powerful duet is happy to announce the RagingPop™ online slot, an Africa-themed story with super high volatility and an RTP of 96%.

Just like other releases manufactured under the YG Masters scheme, this one is powered by GATI, which secures rapid distribution across the globe. Presented in September 2020, this standardized development toolkit is used by other YG Masters partners such as 4 the Player, Northern Lights, and True Lab.

As soon as the reels of RagingPop™ by AvatarUX are launched, players find themselves in the middle of deep savannah, surrounded by mighty animals. The larger ones act as high-paying symbols, while the smaller creatures, such as fish, and butterflies represent the mind-paying icons.

Adding more value to the gameplay is the well-incorporated soundtrack enriched with a variety of audio effects. Available in over 20 international languages, this mobile-ready game is suitable for players from all over the world.

Nicola Longmuir, CEO at AvatarUX, commented on the newly-released adventure as follows:

“RagingPop™ is another exciting addition to our portfolio, and we’re thrilled to launch it across Yggdrasil’s broad network of operators. It’s another strong milestone for us, and we look forward to seeing how our collaborations continue to bear fruit.”

Speaking of collaboration, the two companies have been in successful partnership for more than three years. To be precise, AvatarUX was welcomed to the YGS Masters scheme in February 2019, joining the likes of Fantasma Games, Rabcat, and Northern Lights.

A Multiverse of Thrilling Features

Organized as a 6x4 slot, Raging Pop hosts 235,298 lines and a max multiplier of 20,000x. It accommodates a range of features designed to produce an excellent atmosphere and huge wins.

…the signature mechanic which is activated during free spins. When this feature is initiated, each winning icon pops and gets replaced by 2 symbols, resulting in the enlarged reel height. A detail worth pointing out is that reels can grow up to 7 symbols tall.

There’s a Bonus symbol, depicted as a diamond, which appears only during the Base game. When 3 or more of those are found on the reels, the player unlocks free spins bonus. Wilds exist as well, but they only land during the FS bonus.

Spicing up the story is Gamble Wheel…

…which has multiple stages, allowing players to grab up to 30 additional rounds. Let’s not forget to mention Raging Reels, during which rhinos rampage across the screen, adding multipliers of up to 500x.

More Releases on the Horizon

If you are a fan of PopWins mechanics, then you’ll be glad to hear that the studio plans to enrich its collection in the upcoming period. CritterPop™ accommodates a range of peculiar characters, along with Max win of 20,000x a player’s bet, multiple RTPs (96.131% - 94% - 90.5%) and high variance.

After that, Zombie aPOPalypse™ with super high volatility is the one to hit the shelves, sending chills down the players’ spines. Packed with an RTP of 96.014%, this zombie-themed title accommodates MultiPop™ and 6,250 ways, which means plenty of winning opportunities.

“Yggdrasil and AvatarUX head to the savannah in RagingPop™”, yggdrasilgaming.com, August 22, 2022.

I have to say, AvatarUx is one creative team! Love African - themed slots and this one really has a lot to offer, let's try!

RagingPop to shake the ground under your feet :) I love this African theme. Let's get some dusty winnings.

Wow, busy year for AvatarUX! I liked PapayaPop and LolliPop a lot, so I’ll make sure to check RagingPop as well.