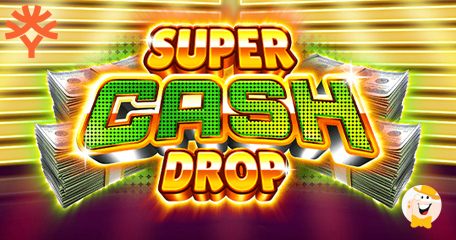 The leading worldwide publisher of online gaming content is back with Bang Bang Games this time to release another smash hit slot, called Super Cash Drop that features Super Reel Expand, enabling the grid to change between 5x4 to 5x8 formats. By comparison, Flexi Lines can give up to 502 ways to win.

The latest project of Bang Bang and Yggdrasil is a cash-themed showdown that gives players a chance to break the bank in a fast-paced environment, followed by high volatility and soaring RTP of 96.60 percent.

Named after its attractive features that take the classic slot machine concept far beyond its capacity for entertainment, Super Cash Drop represents a true refreshment on the market thanks to a host of major twists such as Super Stretch Wilds, Super Reel Expand and Super Extra Spins.

For example, the Super Stretch Wilds are capable of turning any wild in view into an entire reel, simultaneously multiplying any wins that formed during this feature. On top of that, players can make the most while using the provider’s state-of-the-art Flexi-Lines pays system, which comes into view the most during the Super Reel Expand feature.

After every spin, the size of the reel grid can randomly change from 5x4 setup to 5x8, unitedly increasing the number of possible win lines to maximum 502 paylines.

As a result, players can grab even more cash prizes and try to hit the game’s maximum win potential of €1,000,000. Winning combos always light up the reels with vivid colors and animations whenever a prize is generated.

Ultimately, players have an additional opportunity to chase some towering sums during random spins when three bonus scatter symbols emerge and award 10 honorary rounds. During this special mode, Super Stretch Wilds are locked and low symbols are eliminated!

In the Footsteps of Latest YG Masters Slots

Super Cash Drop has definitely got the potential to overshadow the latest YG Masters slots, such as Ancient Eclipse and The Hot Offer. Bang Bang Games has deployed Yggdrasil’s innovative GATI technology during development which is a preconfigured, regulation-ready, standardized toolkit for producing consistently cutting-edge content.

“Super Cash Drop is an excellent addition to YG Masters and we’re delighted to give players this thrilling twist on classic slot machine-style games,” commented Stuart McCarthy, head of Partner Programs at Yggdrasil on the latest project.

His colleague, Frank McPolin, the managing director at Bang Bang Games added that the young studio intends to create vibrant and engaging slots, giving players something new such as multiple wild features and Flexi-Line pays system, spiring up to 502 pay ways per click.

Do you like Super Cash Drop? Leave a comment below and tell us more about your impressions.

Great winning potential and graphics but knowing Yggdrasil it’s going to take a lot more than a few lucky spins to trigger a prize. Hope this one pays.