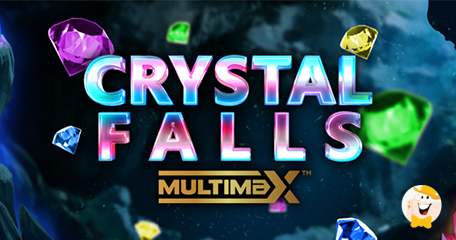 In partnership with Bulletproof Games, Yggdrasil has presented one more feature-filled installment. Structured as a 3x5 grid, Crystal Falls MultiMax™ is an online slot with cascading reels and the premiering one to incorporate Game Engagement Mechanic (GEM) MultiMax™.

Worth adding is that in certain jurisdictions, Crystal Falls MultiMax™ also features a Buy a Bonus option. This means that players have the chance to progress to extra spins immediately.

Stay tuned to take a closer look at the Crystal Falls MultiMax™ slot by Yggdrasil and Bulletproof Games.

Equipped with cascading reels, Crystal Falls MultiMax™ sees the winning symbols removed, making room for new icons to occupy those positions. In Cascade+, the chaining of multiple win combos increases the players’ position on the extra spins trail. As they level up, more complimentary rotations are granted.

How is MultiMax™ activated?

After four or more successful cascades, this component is triggered. While the bonus round is on, whenever a Wild icon hits the reels, the individual MultiMax™ multiplier on reels is increased.

Each reel possessing its own multiplier count. Every payline win is then multiplied by all multipliers involved in each winning combo. Until the end of bonus rotations, the multiplier count is not reset. The total possible multiplier amounts to an impressive 3,125x. In terms of variance, the slot delivers medium to high, while the RTP is 95%.

It’s important to add that Crystal Falls MultiMax™ is the first YG Masters title to incorporate one of Yggdrasil’s innovative Game Engagement Mechanics (GEM). This powerful new feature is expected to be added in both Yggdrasil’s installments as well as in those from the YG Masters program. Multifly! was the studio’s in-house product to premiere this engaging mechanic.

Stuart McCarthy, Head of Product and Programs at Yggdrasil, pointed out that this new feature is designed to take the gaming experience to the next level.

“Crystal Falls MultiMax™ brings exciting gameplay filled with cascading wins, huge multipliers, and plenty of additional player-centric features. With more cascades leading to even bigger wins, there is huge win potential in this thrilling new addition to our portfolio.”

As Michael Bullock, Technical Director at Bulletproof Games explained, MultiMax™ multipliers have “exponential impact” during bonus rounds. This means that each new rotation is more valuable than the previous one, and that’ what contributes to bigger winning potential.

He also stressed out:

“Crystal Falls MultiMax™ has a very unique and electrifying gameplay experience created from the complimentary MultiMax™ and Cascade+ mechanics. With the addition of the Encore game mode, the player can change the profile of the game to match their preference.”

Regarding the Encore game mode…

…its cost is 50% more of the stake. By converting two losing positions into a respin, punters get an additional chance to improve their trail position.

As a small reminder, two companies inked the YG Masters deal in February 2021, when Bulletproof Games joined numerous studios operating under this umbrella.

Just like the other producers who belong to the scheme, the UK-based supplier gained the access to revolutionary GATI technology. Furthermore, the forward-thinking developer also got permission to utilize proprietary mechanics GigaBlox™ and MultiMax™.

What attracted Yggdrasil’s attention is the huge variety of themes and characters found in the studio’s portfolio. Some of the most popular releases include Dragon Lore, The Black Lotus, Diamond Symphony, Blackbeard, and Tiki Runner.

Have you already checked out the Crystal Falls MultiMax™ slot? If so, share your impressions with us.

With so many different and rewarding features, Yggdrasil is truly pushing the boundaries of game development!