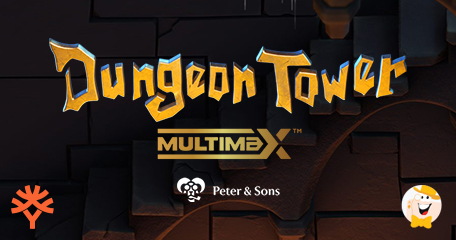 Get Ready for a Spinechilling Adventure to Dungeons of Mount Argol

It’s been six days since presenting a long-expected sequel, Desperate Dawgs 2 Gigablox, in which the wildest dogs in the west return for some drooling wins and fun.

The latest November release from Yggdrasil and its long-standing partner within the YG Masters program is a high volatility 5x5 slot arcade, featuring creatures that guard hidden treasures.

Dungeon Tower MultiMax tells the story of a once forgotten tower and a once great King whose immense treasures are worth up to 20,000x the stake, by the way.

There are several lucrative bonus features and mechanics to get the riches, while the same engine from MexoMax, Firekick, and Crystal Falls plays a huge role in terms of experience.

Players can look forward to striking big wins in this spooky slot thanks to the MultiMax mechanic, whose main feature is a multiplier that is associated with each reel. On top of that, any randomly placed wild symbol can automatically increase its reel multiplier by one.

As a result, the total value of winning symbols in a cascade increases.

Another great moment during the base game occurs when players land three or more scatter symbols anywhere on the game screen. This setup automatically triggers Monster Spins, which are played the same way as standard spins.

Still, there is a slight difference: the top reel multipliers do not reset after each spin!

Players can also use the Dungeon Tower’s Golden Bet feature and potentially double the chance of triggering Monster Spins. The price is 0.20x extra per bet.

In some jurisdictions, the Buy Bonus option will see players receive between seven and eleven complimentary spins for a small fee.

Like all the other games within the YG Masters program, Dungeon Tower MultiMax is also powered by GATI, Yggdrasil’s standardized development toolkit for cutting-edge content.

“We’ve set the bar incredibly high when it comes to games released alongside Yggdrasil, so being able to utilise the MultiMax mechanic was a huge deal for us,” commented Yann Bautista, business development manager at Peter & Sons.

According to the company’s BDM, this dark release is a stellar addition to the studio’s roster and the team hopes both operators and players will enjoy it in the coming months.

The next three titles we’re about to see in the following days and weeks are called Gods VS Gigablox, Rainbow Power Pots UltraNudge, and The Legend of Musashi.

Developed by ReelPlay, Bang Bang, and Peter & Sons, respectively, these slot machines will take players to an earthquaking battle, the end of the rainbow, and ancient Japan.

They are all scheduled for release in December, so stay tuned for the official announcements!

You should definitely try this game, it's in their style, they didn't disappoint this time either.

I've just played the demo, Peter and Sons' aesthetic quality and presentation are immediately recognizable. Keep up the excellent job!

Visually this game looks so good! Peter and Sons always deliver the best-looking game on market. Hope they will do it more in the future.

Love how they make any slot as good as a real video game, I really enjoy playing their titles from time to time. The three upcoming games look promising too!