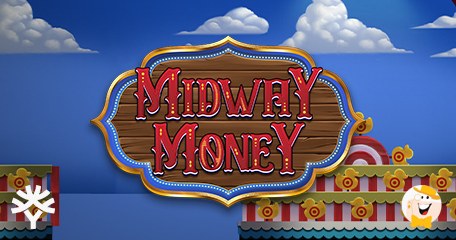 After filling the shelves with all the latest releases throughout August, Yggdrasil and Reel Life Games have joined forces to rattle the iGaming community with a new fairground adventure.

The latest slot launch is all about Midway Money, a 5-reel, 40 payline hit that takes inspiration from iconic traveling shows. It is full of unique and colorful characters, a classic duck shooting range and of course, many incredible prizes.

Get Ready for More Rows

As described by Yggdrasil Gaming,  to get the action going in Midway Money, the first thing you need to do is land the hammer man in full view on reel four. That’s only one piece of the puzzle though. The hammer must land on the fifth reel to make the strength meter activated.

If the result is a ringing bell at the top, the feature selection is awarded.

There are many things to look forward to during feature selection. For example, a Ferris Wheel can award a number of prizes, such as a combination of either the Duck Shoot, Strongman, or Fire Eater events.

Here’s what each one of them brings:

Among other great attractions in Midway Money are also bonus spins. They come into play when three Ferris Wheels appear on the screen, awarding an initial batch of five spins. They also have re-triggers attached.

“The Duck Shoot will help you land more target symbols”

As a special treat, every honorary spin ensures a guaranteed increasing minimum win. On top of that, they have a stronger potential for huge modifiers. If you manage to trigger a large win at the beginning of the round, it may repeat on every subsequent spin.

The Power of GATI

As announced earlier, Midway Money is one of the latest hits from Reel Life Games to join the YG Masters portfolio. It comes right after the Winfall in Paradise, a title powered by GATI, Yggdrasil’s state-of-the-art technology.

It enables all partner studios (4ThePlayer, Northern Lights, Avatar UX, True Lab and so on) to employ a development toolkit and produce cutting-edge content.

“Midway Money brings an exciting, inventive theme to players, along with a number of fantastic features that really bring out the feel of the fair,” commented Stuart McCarthy, head of product & programs at Yggdrasil.

He also explained that the studio’s next release is a great addition to the YG Masters universe, and that it is now an important part of a larger portfolio full of awesome games.

According to Andy Kniaz, CEO at Reel Life Games, one of the latest partners to join Yggdrasil’s program, the company is extremely pleased to launch its new slot within YG Masters. Midway Money is an iconic release that will bring to life massive excitement and win potential, concluded the chief executive.

“Roll up, Roll up! Prepare for the fair in Yggdrasil and Reel Life Games’ Midway Money”, yggdrasilgaming.com, September 5th, 2022.

Great-looking slot, like when they play with graphics and let their imagination kick in like crazy hahahaha! Definitely worth giving a shot!!