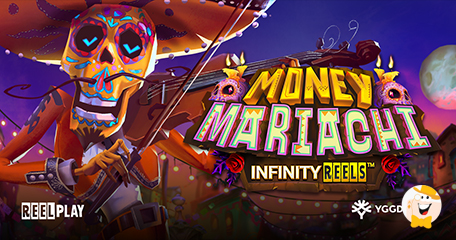 After celebrating entrance to Greece earlier in December 2021, Yggdrasil is back with a new game in collaboration with ReelPlay to kick off the year with a fun-filled fiesta.

For this special occasion, the town’s Magical Money Mariachi band creates melodic and celebratory party music to wake the dead and hopefully help players reach the maximum payout of €250,000.

The month of January 2022 begins with a new take on Mexico’s El Dia de los Muertos, the last day of the All Hallowtide season. Since it’s not only a day of remembrance, but also of celebrations, Yggdrasil and ReelPlay have joined forces once again to deliver an impressive entry game with a 3x4 reel grid.

It is packed with one of the most renowned mechanics in the entire iGaming industry, Infinity Reels, which add another reel and respin for every successful win in this game, including an increasing multiplier!

On top of that, a bonus prize of 888x a player’s stake is awarded if 12 or more reels are added in a single spin. This rewarding occurrence can happen during base game and LevelUp respins.

However, to activate Level-Up Respins, players must land three Shrine symbols simultaneously. During this stage, they must also collect skull symbols to reach the next level.

There are also different modifiers available that can assist players in their quest for riches during Level-Up Respins. For example, each instrument strengthens the Shrines by adding more souls into them; the guitar grows, the trumpet freezes respins in place, the violin boosts the prizes, and the beautiful hymn charms, as described by the studio.

Yggdrasil has even made sure to include the Buy Feature and allow players to progress straight to the bonus round, but only in certain jurisdictions.

After Age of Beasts, Hypernova 10K Ways and GEMS, Money Mariachi Infinity Reels represents the newest release from ReelPlay under the YG Masters program, which constantly introduces impressive games from a host of GATI-affiliated providers.

Marked as another exciting release through the YG Masters program, Money Mariachi represents an important milestone in Yggdrasil’s strong relationship with ReelPlay.

David Johnson, CEO at ReelPlay is confident about the success of Money Mariachi Infinity Reels, whose entire package of art, sound and math sets the bar for 2022.

According to the chief executive, the mechanics will give players infinite possibilities to win and hopefully trigger increasing prizes across an extending reel set.

“one of the most renowned mechanics in the entire iGaming industry, Infinity Reels”

Reelplay is turning to be quite a machine for developing slots, I have a feeling Yggdrasil mostly collaborates with them... and they make great stuff, no doubt about it!