Yggdrasil and ReelPlay Sending Players to a Rich Fantasy World in Age of Beasts! 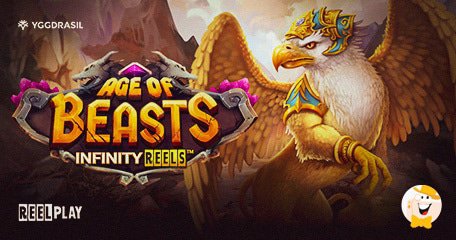 Start Another Epic Battle with Yggdrasil, This Time on Infinity Reels

After unveiling four impressive new releases last month, Yggdrasil and ReelPlay united their forces once again to transport all players to a rich fantasy world throughout December, and let them join legendary gods, mighty beasts and terrifying demons in an unforgettable battle for the ages!

The latest project of the two highly acclaimed software studios is called Age of Beasts Infinity Reels and it combines popular mechanics with a lucrative Bonus Wheel, adding to the game’s limitless possibilities.

Instant win prizes of up to 1,000x are also in for the taking.

To get the most of Yggdrasil’s latest hit, Age of Beasts, focusing on the Bonus Wheel is key in driving the Infinity Reels mechanism to victory, where each spin of the wheel determines a greater number of free spins and win multipliers.

There is a possibility to win a tantalizing bonus prize of 888xbet on top of any other wins too, specifically, when the game’s reels expand to 13 or more in total…

As disclosed, Age of Beasts Infinity Reels is the hottest title from ReelPlay at the moment, as it further strengthens the provider’s growing catalog of slots, developed under the revered YG Masters program.

“We’ve been truly fortunate to be able to offer our partners a number of fantastic Infinity Reels games to date, and Age of Beasts Infinity Reels™ is set to be another huge hit,” explains Stuart McCarthy, head of product and programs at Yggdrasil.

According to McCarthy, players will know it’s a winner on their hands from the moment they lay eyes on this game, which is complemented with the industry’s latest engaging mechanics and fantastic mythology design. The head of product is confident that customers will enjoy it just as much as the studio itself.

Meanwhile, CEO at ReelPlay, David Johnson, commented, that combining Infinity Reels with a Bonus Wheel is the right recipe to extend the IP and attract an even wider field of players on the market.

Age of Beasts comes with the best-in-class art and animation solutions, including a very rich soundscape, and both studios are very enthusiastic about unleashing the game across the Yggdrasil network!

Coming up This December!

This month, the next slot to launch will be Valkyries from Peter & Sons, where players can journey to the gates of Valhalla and welcome the fallen heroes.

It plays out on a 5x3 grid with 10 paylines, but it features Dropping and Locking Wilds with random multipliers, wild overlap multipliers, a Power Reel that triggers respins until no more Dropping Wilds appear and free spins to spice up the action!

Jumbo Jellies by Bang Bang Games and Cthulhu from G. Games will follow soon after, so stay tuned!

“Yggdrasil and ReelPlay gear up for an epic battle in Age of Beasts Infinity Reels™”, yggdrasilgaming.com, December 2nd, 2021.

“The latest project of the two highly acclaimed software studios”

I get totally blown away with every new release from Yggdrasil, but the last couple of games are impressive to say the least, by all means. They do not pay much, it’s a fact, but taking them even for a spin out of entertainment is worthwhile. Great job, the other titles sound inviting too.