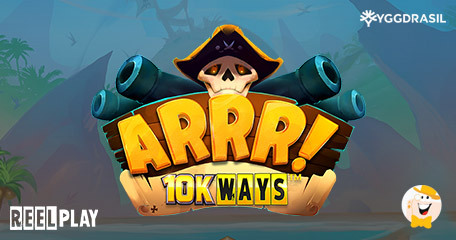 After joining forces with Reflex Gaming to unlock mythical riches in Eye of Persia 2 on 16 June, Yggdrasil Gaming and ReelPlay are back for a swashbuckling sea quest in their latest YG Masters project, ARRR! 10K WAYS.

The studio’s massively admired 10K WAYS mechanic has seen a significant growth in popularity after Bananaz 10K WAYS, where players had to go the distance against fearsome pirates to grasp enormous sea treasures.

This time, things go even deeper.

As you embark on another sea quest in Arrr! 10K Ways from ReelPlay, focus on the Treasure Chest symbols as they act as scatters and trigger the Bonus Respins for four of a kind. During this level, Kraken, Captain or Chest modifiers can be highly rewarding with the Chest revealing a prize between 1-1,000x.

The Jolly Roger symbol represents a wild and it substitutes for all images except the Treasure Chest, of course.

As Yggdrasil Gaming and its partner studio ReelPlay slowly increase the production of cutting-edge slots with industry-first features, players in certain regions can even look forward to progressing to the bonus spins level by purchase.

On top of that, they will be given a chance to contemplate an additional gamble feature of up to 5x their total win at the end of the Bonus Respins, enabling them to with a maximum of up to 20,000x the stake!

After releasing one of its greatest hits to date, ReelPlay is expanding the YG Masters portfolio with ARRR! 10K WAYS, following Mega Pearl Gigablox. Just like every other title in the series, the game is powered by Yggdrasil’s state-of-the-art technology GATI that enables partners to employ state-of-the-art content solutions.

McCarthy is also very excited to see another smash hit joining the YG Masters portfolio, hoping that players will fall in love with it at first sight, just like with Bananaz 10K Ways.

Coming on June 30th is Jelly’s latest BLOX game, where players will feel the thunder of the Buffalo across 5x4 reels with 20 paylines. This release comes with instant coin scatter jackpots up to 1,000x in the base game, but they may increase up to 2,500x in the bonus round.

I didn't play that much 10K Ways, but with the pirate theme looks interesting.

10K WAYS mechanic is one of the most interesting game mechanics I've seen , and to see that put to use in a pirate themed game (my favorite) is very satisfying. Great work once again!

I'm impressed by the slot's theme and can't wait to give it a go.

Pirate-themed always looks so exciting, and the features are great! Those are enough reasons to try this game! :)

Magnificent as always, this is exactly what this industry needs! Great job, Yggdrasil!!