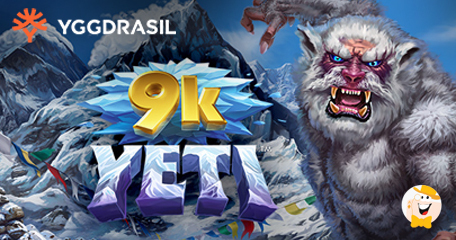 Players can get in line to experience an exciting mountainous hike around the holidays, as Yggdrasil Gaming consolidates another winter game in big reel portrait mode, 9k Yeti.

For encountering the mythical creature from the Himalayas fans will be rewarded and entitled to win more than 9,000 times the stake, thanks to the all-ways-pays mechanics with 4096 pay lines. Addedly, getting lost in a snowstorm for a while may also bring up to 88 extra rounds, followed with plenty of re-triggers.

Let’s take a peek at the highlights.

Lead generation creators of online and mobile games have integrated an entirely new innovation in 9k Yeti, allowing players to experience an immersive gameplay using 70 per cent of the display.

The Big Reel Portrait Mode really brings action to life in this monumental game as stacking reels and other snowstorm features launch a fantastic avalanche of wins... Developed in collaboration with 4ThePlayer, this release will definitely become an instant hit on the market, according to Stuart McCarthy, head of studio partnerships at Yggdrasil. He adds:

“We’re delighted to be launching our fourth YGS Masters slot of the year with 4ThePlayer. Together we have created a fantastic mobile-first game that players will instantly take to and want to come back to time and again.”

Andrew Porter, chief executive at the partner studio is very proud of the group’s first mobile slot, a never before seen concept where portrait takes up 70% of the screen.

“We are very proud of our first slot release. Being players ourselves we have spent a lot of time making sure it’s a game we would want to play. Adding the excitement and big win potential we want from games.

There are four YGS titles in total: Nikola Tesla’s Incredible Machine, Lilith’s Inferno, Niagara Falls and 9k Yeti, all released throughout 2019. Classified as a high volatility game, the latest release carries a startling return to player ratio of 97 per cent.

The next title in line, Aldo’s Journey, is coming on November 21st, and it is inspired by a traveling merchant, motivated by money. Aldo is on a journey to explore 4 different cities and their cultures while dealing gold along the way.