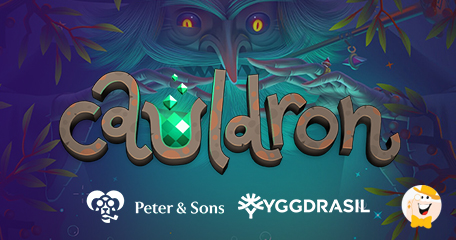 First-class publisher for the online casino industry, Yggdrasil Gaming, has struck an agreement with Peter & Sons to unveil the new slot, Cauldron. The game takes players to the magical world, allowing them to fulfill all dreams…

The story of the Cauldron is set in the deep caves of Algroth, with the blue wizard guarding the Cauldron and players looking to discover hidden treasures and massive prizes. The title is powered by Yggdrasil’s technology GATI, which is already used by many YG Masters members.

More About the Slot Elements

The latest slot from the company comes with a 5×3 set, high-volatility slot, and casino spins unlocked by collecting scatter elements. If three or more scatters appear on the reels, it activates up to 10 casino spins. A win on a high-paying element is enhanced for all subsequent spins, paying a double award. Each upgrade comes with an additional bonus spin.

If a bonus scatter appears on the reels, it becomes collected with each element awarding one point to the progress bar. When you reach 770 points, you will be able to unlock the super casino spins mode. During the same feature, all high symbols are enhanced, and low-paying elements are removed from the reels, allowing users to win more often.

Cauldron is an incredibly designed game, with immersive illustrations and graphics bringing the gaming experience to another level. It includes the blue wizard waiting for the magic, as well as mythical characters filling the reels.

Peter & Sons have already developed and released three titles via the YG Masters program since entering the program in October 2020.

“Cauldron is another impressive game from Peter & Sons that we are thrilled to release via YG Masters.

“The creative look and feel of the game really stand out and immediately immerse players in a fantasy world full of thrilling features and big win potential. We are certain that Cauldron will be a massive hit with players like Peter & Sons previous titles.”

Business Development Manager at Peter & Sons, Yann Bautista, noted that being part of YG Masters allowed his company to deliver several premium games within a short period of time as well as to achieve a great reach via Yggdrasil’s distribution network. He concluded:

“With Cauldron, we bring a touch of magic to players while they hunt down big wins and enjoy our thrilling features in a beautiful setting.”

“Yggdrasil Gaming, has struck an agreement with Peter & Sons ”

I tried the demo version of this slot and I'm fascinated by graphic quality, design and those funny creatures, especially that creepy worm sticking out of an apple. :)

I love the design of P&S slots. The graphic quality is once again remarkable. This is another slot that did not disappoint me definitely :)

Let's meet a magical world with this magical game and hunt the huge prizes. No doubt, Yggrasil tried their hardest with Peter and Sons to create an innovative release for their passionate fans. Have fun :)

This will be another great game for YG customers…