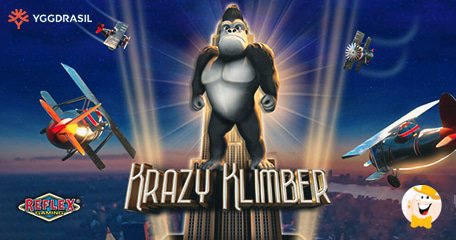 Yggdrasil Gaming, a well-known publisher of online content, has just delivered the Krazy Klimber experience via Reflex Gaming. Players are welcome to join the game and follow the beast in his mission on the tower. Search for massive winnings and get the most out of the experience.

Krazy Klimber is the latest slot release from Yggdrasil, featuring a matrix of 3×5 and 20 paylines. The main hero of the game is an ape who is scaling the tower while looking for big winnings. The game introduces two spectacular features including the Krazy Klimber bonus game and Bonus spins. To trigger the Krazy Klimber feature, players should land bonus elements on reels 1, 3, and 5. Different levels feature different prizes including multipliers and casino spins. As part of this feature, players can enjoy up to 1,000x stake.

After the entry in the bonus spins round, players will receive up to three super sliding wilds which move between reels and release colossal wins on every spin.

Krazy Klimber is the most recent release from Reflex Gaming and part of the YG Masters program. The brand has recently added Desperate Dawgs which was launched via William Hill and has already made tremendous success. The title is powered by GATI technology, which opens an opportunity for partners to use preconfigured, regulation-ready and standardized toolkit as well as produce first-class content.

Expressing his opinion on the new addition to the portfolio, Head of Product and Programs at Yggdrasil, Stuart McCarthy, said:

“With an instantly recognisable theme and huge win potential through the Krazy Klimber feature, we can’t wait to see how the game is received by players across our operator network.”

On the other side, Chief Product Officer at Reflex Gaming, Mat Ingram, says that his company is thrilled to introduce Krazy Klimber via the already successful YG Masters program. According to his words, the game has been one of the strongest games in land-based establishments. The game includes not only the “toe-tapping rhythms of the jazz soundtrack” but also the “buzz of circling bi-planes” and lights sweeping across the Manhattan landscape. The company is looking forward to seeing customers scale new heights of engagement and excitement while searching for new winnings.

“Krazy Klimber is the latest slot release from Yggdrasil”

Reflex Gaming did a decent job with this game. Payout percentage is not the greatest, but I will try it out...

I tried the demo version of this slot and I don't know why but, this ape Klimber reminds me of King Kong! ;) I like everything from Yggdrasil! :)

This game takes me back to childhood :) Nice pack of features, I will have to try it :)

This game will rock and player will see a difference…