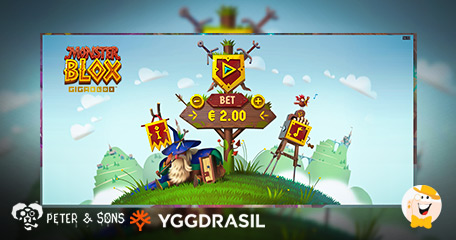 In the last weeks of November, we had a chance to see two exquisite titles in Yggdrasil’s rapidly increasing portfolio – a fantasy adventure 5 Clans: The Final Battle and an electrifying hit Valhalla Saga: Thunder of Thor.

The next-in-line project between Yggdrasil and one of its earliest members of the YG Masters program, Peter & Sons, plays out in a 6x4 configuration, featuring the studio’s cutting-edge art style and popular cascading wins mechanics.

It follows a storyline of heroes who gather at an old tavern where they plot to hunt down monsters that threaten their lands. Thanks to the massively popular Gigablox mechanic, Monster Blox also comes with a giant symbol land on every spin, rising from 2x2 in size to a gigantic 6x6 square.

The best thing about wilds is that three of them can randomly appear on any reel during base play, while every win awards a respin, or Monster Respins, as they are called. For the duration of this feature, there is an additional row in play and if the respin is successful, players continue on a massive 6x8 grid. In addition, respins continue until there are no more wins, but the random wild placements can still occur.

On a different note, a hunter can transform any symbol into wilds, including Gigablox items. This modifier can happen during respins and free spins.

The game’s exclusive feature or Monster Free Spins is triggered when five or more scatters land on a single spin. Apart from expanding the grid to a 6x8 layout with 100 paylines, this mode will also award an extra spin for each scatter that lands during the bonus. Furthermore, these symbols will also charge a meter and potentially increase the monster multiplier up to 10x.

In some jurisdictions, players will have access to the buy feature and purchase free spins at a certain price.

Another Action-Packed Epic from Peter & Sons

After Hammer of Gods, Monster Blox Gigablox represents the latest addition to the YG Masters portfolio developed in partnership with Peter & Sons. It is powered by GATI, Yggdrasil’s state-of-the-art technology for faster deployment of cutting-edge content.

Head of product and programs at Yggdrasil Gaming, Stuart McCarthy, said about Monster Blox Gigablox that it requires only the bravest players in town to fight off the fearsome beasts.

“Using the Gigablox mechanic, along with both a respins and free spins mode, Peter & Sons are again able to create something truly unique in their eye-catching style. We can’t wait to see how players across our network react to it,” concluded McCarthy.

On that note, Yann Bautista, business development manager at Peter & Sons added that studio has conjured up another forward-thinking, action-packed title after Precious 7 featuring guaranteed wins during free spins and a lucrative respins mode.

Bautista is proud to add another exciting game as part of the YG Masters program and hopes to continue achieving milestones with Yggdrasil in the future.

“every win awards a respin”

This studio has always made excellent slot games. Monster Blox Gigablox is going to be a popular one.

The graphics in this one are pushing the boundaries of gaming, it can’t get any better, honestly, but... no matter how much effort they put into the development, Yggdrasil slots still don’t pay as they should. Except for a few earlier titles, maybe.