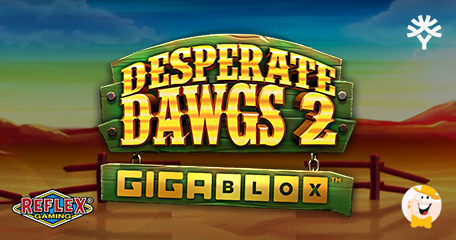 Yggdrasil continues to enhance its leading position in the market by releasing some of the best games. The company joined forces with Reflex Gaming to deliver a brand-new game, Desperate Dawgs 2 GigaBlox™.

The latest game from the company is full of features with six reels and 40 paylines. The game also uses enormous symbols up to 6×6 and a popular Game Engagement Mechanic (GEM), GigaBlox. Furthermore, Desperate Dawgs 2 GigaBlox can see users claim up to 9,872 x the bet thanks to three features.

If players hit six or more red scatters, they will activate the Train Robber Bonus, when a steam train arrives at a station and unveils the contents of its wagons. Each wagon comes with Gold, Silver, or Notes. You can also reveal dynamite on these wagons which complete a number of trails. If a trail is full, the doors of a safe will be open to delivering up to 200x.

Those who are happy to trigger six or additional yellow scatters will activate the Gunslinger bonus. At this moment, gunshots will be fired at targets that have certain values. Based on the bullet fired, these values will be multiplied by up to 10x.

There is also a chance to hit the Bad Boy Bonus by matching six or more green scatters. This awards Bonus Spins in which the reels are extended by one row and 15 additional paylines each time a win happens. Any new wins unveiled are paid and two additional Bonus Spins are credited.

Players can also take advantage of the Golden bet facility and enhance their bet by 50% for even better winning chances.

Commenting on the latest step, Stuart McCarthy, Head of Product & Programs at Yggdrasil, says that it has been fantastic working together with Reflex Gaming to announce the return of the bad boys, the Desperate Dawgs! They are confident that this Western release with GEM GigaBlox will be another great hit with users, offering a fun theme and incredible win potential.

“To date, Desperate Dawgs has been our most popular game with Yggdrasil. After breaking records during its opening weekend, we have high hopes for the sequel. Fans of the original Desperate Dawgs will love this, and we hope that it will also appeal to GigaBlox enthusiasts.”

Yggdrasil is a top-tier provider of online gaming products for iGaming operators. The company was established in 2013 and has become one of the most successful brands in the market. It specializes in the production of different verticals such as Slots, Table Games, and Bingo