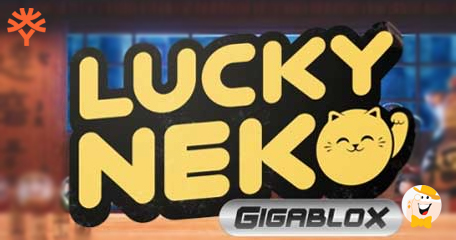 Following in the footsteps of the very successful Splitz engine, the Swedish iGaming powerhouse Yggdrasil has rolled out a brand-new game mechanics that promises to be a game-changer on the market. And the first slot to feature this new engine is called Lucky Neko Gigablox!

This is the company’s third revolutionary mechanic they have released since their beginnings in 2013 (after Splitz and MultiFly) and it includes giant symbols that can even reach 6x6 in size!

Extra Spins is Where It’s At

…and is set in the decidedly authentic environment, not only in visuals and graphics, but also in the sounds of a wonderful soundtrack.

The new title has a 6x4 configuration in its base game, which expands to 6x8 during extra spins! In the base game, there are 40 fixed paylines and gigablox symbols ranging from 2x2 to 4x4 will land occasionally on reels.

If five or more Lucky Cat symbols land on the reels, the extra spins round with substantially expanded reels will start. The reels change orientation to portrait and expand the amount of paylines. A Blessed symbol is picked at random to award the 5x multiplier during the entire extra spins session.

During these extra spins, gigablox symbols can grow to 5x5 and even 6x6 in size!

This is a game suitable for high-rollers, as the betting range can go up to $100. It is a high-volatility game whose RTP is above 96%.

“Every spin of Lucky Neko Gigablox™ is a joy to play. With the Gigablox reels the next big win is just around the corner and the free spins offer some serious win potential from time to time.

We continue to drive innovation throughout the industry and can’t wait to see how the Gigablox™ mechanic is received by our fans across the globe.”

LCB has recently held its first iteration of a series of live streams called LCB’s World Slot Premieres and Lucky Neko Gigablox was the first game we played!

You can watch the entire show below!

Also, make sure you read our own review of the game HERE!

Looks amazing! And that demo video is just great.