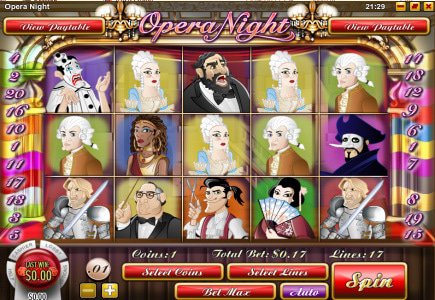 Opera Night Slot to satisfy those with finer taste

A new slot has been launched by online gaming software developer Rival Gaming - Opera Night is its name, and it presents this classical music theme in a rather unusual and comical way.

The slot is played on 5 reels and 20 paylines, and it features exquisite graphics, which present a rich list of opera performers, including a Japanese Geisha, the Phantom of the Opera, a character from Figaro, an African queen, a sad clown, an American independence revolutionary, a knight in armor, and a Spanish flamenco dancer from 'Carmen.'

As for the new release’s features, those involve a second screen interactive bonus, Wilds, Scatters, up to 20 Free Spins and Multipliers. There is also a new feature in the game, called The Opera Drop, triggered by three or more Phantoms appearing across the reels which cause them to fall lower and be replaced by the symbols immediately above, which may bring more prizes in a single spin.
General Gambling News Casino Games Casino Software Back to articles