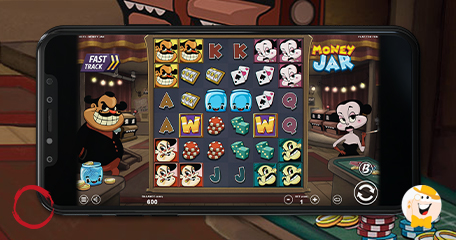 The Sound of Clinking Coins- Music to Players’ Ears

Multi-licensed provider of premium online casino games, Slotmill, is happy to introduce players to Money Jar, the 16th slot added to its portfolio. Inspired by comic book-style art, the game is sure to thrill fans of Betty Boop, the most authentic human woman cartoon character of her day.

Underneath the colorful surface, players shall encounter a wide range of rewarding features. Countdown Wilds, respins, and a bonus game with humongous winning exposure are just some of the elements thanks to which the reels are infused with action.

A Wealthy Collection of Powerful Features

As soon as Money Jar by Slotmill is launched, players are introduced to the set of authentic characters all inspired by Betty Boop aesthetics. Two male and two female characters represent the high-paying icons, while lower-value ones are depicted as poker chips, cards, and dice among all.

“With Money Jar we yet again push the boundaries of slot gameplay combining retro graphical format with new and innovative features that give players a fast and exciting experience”.

…this 6x6 video slot with 46,656 betways bolsters numerous features. There’s Win Respin, during which new winning combos can hit the reels, as well as Wild Countdown, which indicates the number of times a Wild symbol can be a part of a win.

Furthermore, there’s a Money Jar Bonus which is activated when 3 or 4 Money Jar icons hit any of the central reels. The bonus mode starts with three lives, as presented in the Life Meter. Each spin reduces the number of lives by one, whereas landing the extra life symbol (a poker chip with the red heart) resets the Meter to 3 lives.

There are a couple of feature symbols as well, each with a different power. Those are Doubler, Payer, Magnet, Persistent Payer, and Persistent Magnet. Let’s not forget to mention the “Fast Track” which can be initiated in the base game only. It ensures direct access to the game’s features.

A Team of Productive Gaming Enthusiasts

The first game to go live in the ongoing year was Fruit Smash, with up to 6,000x the bet. In March, the developer enriched its catalog with the Drunken Sailors slot, which incorporates both “Fast Track” and “Burst Mode”. April brought Coin Quest, while June dished out The Big Hit. Currently, games offer 21 different language options with new ones being added regularly.

Aside from diligently boosting its portfolio…

…the developer has been enlarging its network of strategic partners. February this year was marked with the Rootz LTD agreement, while in March the studio joined forces with Avento MD, sealed an agreement with ATG, and announced a deal with SuperSeven. Other partners include Games Global, Royal Panda, Soft2Bet, Slotegrator, Glitnor Group, SoftSwiss and more.

To date, the company was granted multiple licenses, so its content is certified for Estonia, Latvia, Lithuania, Sweden, Romania, and many other jurisdictions.

“reels are infused with action”

Betty Boop featured in Money Jar new slot game, what more can we ask for, she is a true babe! ;) Jokes aside, Great new game with comic book style to it, Slotmill has been very innovative with its games and always present a wealthy collection of features. Very insightful article. Thank you.

The studio did an excellent job with all these features. I’m looking forward to seeing more from Slotmill.