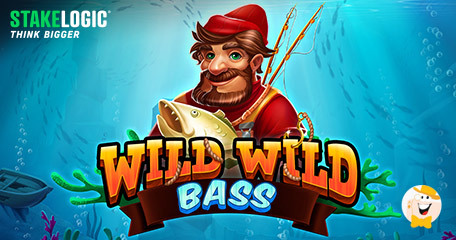 Stakelogic, a dominant supplier of slots, invites players to fishing adventure in the latest game and part of the cutting-edge Greenlogic® Partner Program.

Wild Wild Bass was created in cooperation with Hurricane Games and takes users on a fishing experience where they can land some big wins.

During the activity of Big Catch, Bass symbols appear on the reels with their prize value which is given in addition to basic wins. As part of the feature, players will look for the Insane Catch symbol that can appear on reel six with 3 symbol versions: +2 Insane Spins, +3 Insane Spins, and +5 Insane Spins. The Insane Catch feature then sets in motion.

Reels 3, 4, 5, and 6 will lead to 20 independent reels, and reels 1 and 2 become a Multiplier display. With every Insane Spin, a Multiplier value from x2 to x5 is selected. Only Bass elements, Insane Catch, and Blank symbols will appear at that moment.

Commenting on the new title, Salvatore Campione, Head of Greenlogic® from Stakelogic noted:

“This is yet another great example of the incredible slots that can be created when we join forces with studios such as Hurricane Games via our Greenlogic® Partner Program.

Wild Wild Bass is visually striking and feature-rich, allowing players to hook in potentially massive wins with each spin. We look forward to seeing players hang up their Gone Fishing signs and for them to reel in some major prizes.”

looks fun i wonder what casinos this game is on?

This game looks attractive and players will enjoy its potential…