Is Gala to Partner with Playtech? 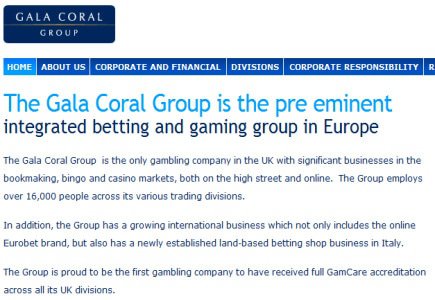 It was reported over the weekend by the Israeli and UK press that there’s a new deal in sight – namely, it seems that online gambling group Gala Coral is in negotiations with online gambling software developer Playtech on a software supply deal which involves online bingo, sports betting and casino games.

It was specified that this is not an acquisition initiative, but rather a supplier-customer deal. The Gala-Playtech negotiations follow the resolved contractual dispute between Playtech and William Hill plc regarding their joint venture in William Hill Online, and this new development now enables Playtech to enter into software provision agreements in the normal run of business.

However, Gala Coral IT staff has allegedly received warning that there may be job cuts if the software deal is nailed by Gala Coral which recently completed a complex refinancing but still has a GBP2 billion debt burden.

At the moment, the company is undergoing a serious internal reorganization, in which it previously claimed that 100 new jobs will be created. Still, since it is splitting itself into largely autonomous divisions, this caused speculation that it is preparing to sell some divisions when the market improves.
General Gambling News Casino Games Casino Software Back to articles