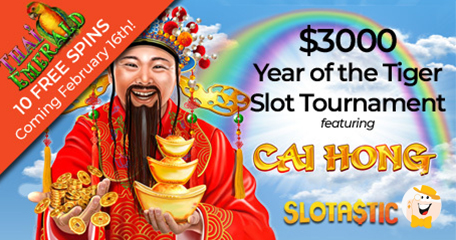 As the years goes on, Slotastic decides to bring even more fun to its players and announces a month-long $3000 Year of the Tiger Slots Tournament.

It is already live, so stick around to learn how you can participate, but do keep in mind that the operator is giving away 10 complimentary spins on all new Thai Emerald, RTG’s next-in-line video slot, going live on February 16th at your favorite venue.

Known for its many seasonal promotions, Slotastic Casino is back to ring in the Chinese New Year this month with a $3000 Freeroll Slots Tournament. This competition is featuring the highly popular Cai Hong slot game from RTG. You can opt in and participate from February 1st and play until February 28th.

As you may know, a freeroll tourney is a great chance to win some big prize money.

Slotastic hosts a selection of slot tournaments every week, allowing players to battle against one other worldwide and compete for various cash prizes. However, this tourney comes with a large prize pool and that makes it a special event.

For starters, a player receives the same amount of starting credits to wager. Like with any regular slot play, they can decide how much to wager on each spin according to their play style.

There is a special progress tracker that shows each player their current leaderboard position. At the end of the month, the player with the most credits will take first prize, but 100 players can claim a real money reward.

The best thing about it, there is no entry fee for the first round. Partakers in the tourney can build their way up the leaderboard by purchasing additional coins for $3.50.

Although Slotastic has a remarkable selection of Chinese slot games, Cai Hong was somehow a natural choice for this year’s Lunar Festival Tour. Launched in 2018 as a medium volatility title and one of RTG’s best payout slots, Cai Hong brings rainbow riches straight from Caishen, the God of Wealth and Prosperity.

Thanks to its super paying wilds, scatters and up to 33 free spins with a 15x multiplier, this game promises good luck and fortune for all.

If you want to see more about the freeroll, check out our video:

Later this month, Slotastic will introduce a glittering new game from Realtime Gaming, and the operator will give players a chance to try it for free.

The provider’s latest exotic title is called Thai Emerald, and it comes with Mystery Stacked symbols that can trigger up to 8 free spins. Keeping an eye on the stunning tropical parrot however is key to completing potential winning combinations as it acts as the wild symbol.

Thai Emerald will be available in Slotastic's download and instant play online casino. Players who made at least one deposit until February 28th will get 10 honorary spins with a coupon code EMERALD10.

“this tourney comes with a large prize pool”

Great analogy Bixy! :) Really like how you say we will battle it out like tigers haha! I'm 100% gonna participate in this tournament! By the way, I'm looking forward to the glittering Thai Emerald 10 Free Spins promotion. Thank you Slotastic and LCB for posting this article! Blessed!

Thanks, Slotastic for this great promo! Hurry up LCB'ers, don't miss a chance to win these fantastic prizes!

Sounds like a great tournament. Also the chosen game based on the chinese New Year sounds awesome and challenging.Cai Hong is equivalent to Deep Blue which is a highly volatile slot and will take lots of spins to trigger the free spins feature from my experience. A nice and challenging tourney - So to all players participants...

Sounds like a great tournament. Also the chosen game based on the chinese New Year sounds awesome and challenging.Cai Hong is equivalent to Deep Blue which is a highly volatile slot and will take lots of spins to trigger the free spins feature from my experience. A nice and challenging tourney - So to all players participants - Good Luck and May the wins be with you.

Let's participate and fight like tigers in this Tiger Slots Tournament Slotastic prepared for us. Happy Chinese New Year :)

Thanks, Slotastic for this incredible prize pool :) We have a whole month to win the prize.

This is quite a freeroll, don’t remember the last time I played for so much money, thanks Slotastic, this is really a treat!