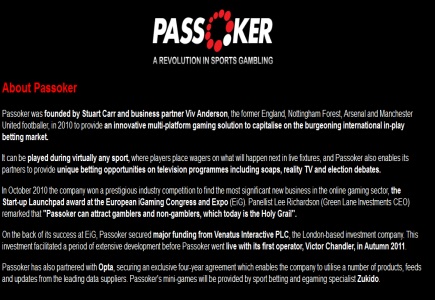 Both games will be available at the existing Passoker operators’ websites, such as William Hill, Bet Victor and JenningsBet.

The first game, Reel Football is a video slot whose theme features classic archive content from the FA Cup, as licensed by the Football Association. It has a very interesting bonus feature in which players must predict the outcome of an incident before seeing the action performed.

As for the roulette game, Racing Riches, it is an incident-based title which plays alongside live and classic sports events, and in it fruit icons are allocated to six lanes before they advance closer towards the Racing Riches finishing line on the reoccurrence of randomly assigned incidents, such as a free kick or goal in football, said the company.

It was further specified that players’ chips are placed on the board in places where they predict the fruits will finish the race. Play ends when the first piece of fruit crosses the finishing line, and payouts are based on all squares with fruit remaining, according to chip values, so players can benefit from multiple winning positions one time.

According to Stuart Carr, managing director of Reel Sports and Passoker, “Our success with Passoker shows that our formula of incident-based games is one that is popular and works very well. We are supplementing Passoker through the evolution of the initial concept and a series of games that appeal to a different audience and player type.”
General Gambling News Casino Games Back to articles