From the Players, for the Players Shakes off the Cold with Bitcoin Penguin Casino 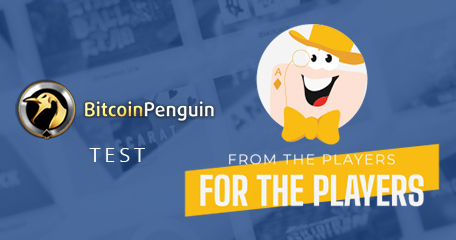 We’re back with another rather interesting test report in November, all thanks to our devoted online casino tester, MarijaS, who became part of the project “From the Players, for the Players”, some time ago.

Without further ado, she paid a visit to Bitcoin Penguin Casino, at the very end of October, a US-friendly betting site. It’s one of those places where customers must proceed with caution, since this brand is unlicensed and disputing any claims with a licensing gambling authority is simply NOT an option. That is why the site has been placed on our warning list in 2020.

The brand’s presence on the market dates back to 2015. Unfortunately, in spite of being active in the industry for quite some time, playing at this venue is discouraged as players are vulnerable to unethical business practices. Additionally, there are frequent complaints about delayed payments and unpaid winnings by their customers, and the casino has not been diligent in addressing these complaints, although they’ve been known to occasionally step up and solve some of them.

With that out of the way, as well as to see whether it’s entirely true, our tester has gone the distance with Bitcoin Penguin for the first time, aiming to bring you hands-on experience about depositing, playing and cashing out at this gaming station.

You may have seen some of MarijaS work as a tester within our project, but if you want to expand that knowledge, stick about a couple of minutes and see what it’s like to shake off the cold with an unlicensed penguin.

In a few words, this sums up the testing:

Everything seems legit here. Let’s see if things really go with the flow on this site.

Signing up with Bitcoin Penguin Casino is done in a simple step that requires each player to enter a valid email address and a strong password. After confirming their age, choosing cryptocurrency and accepting the terms, new customers are allowed to enter.

For MarijaS, registering took place on 22 October. She immediately received an email with instructions on how to confirm her email address and complete the verification procedure. 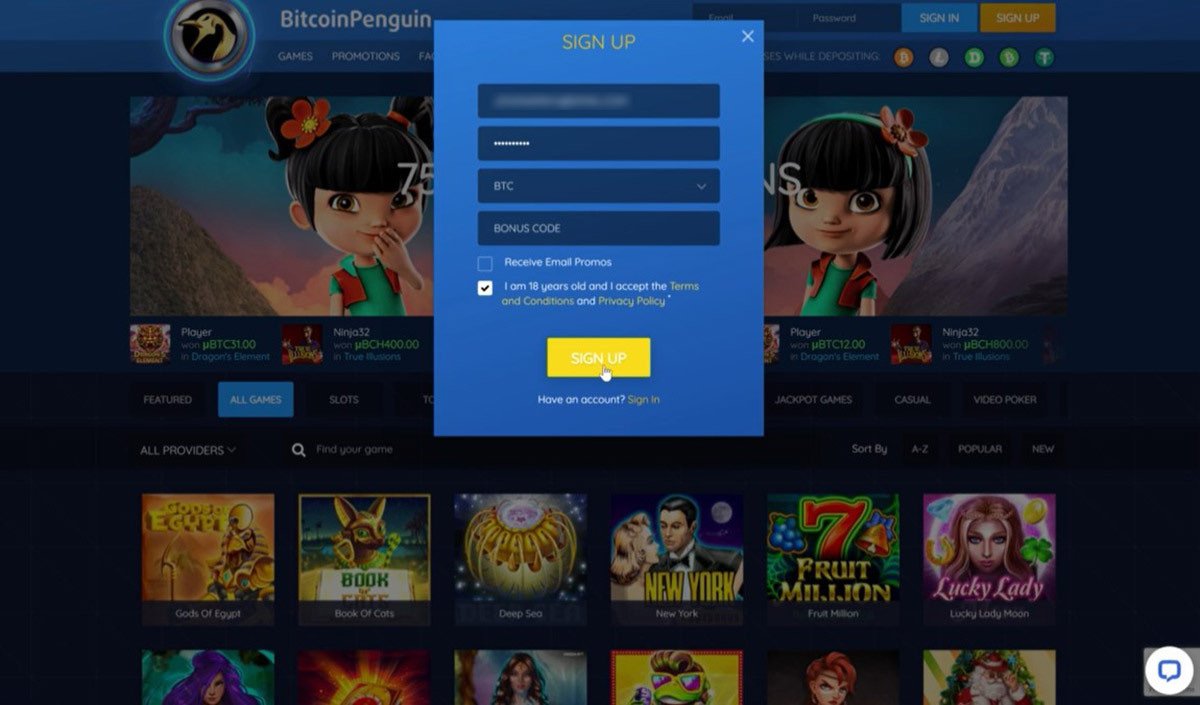 Before she could proceed to the next phase, or depositing to be precise, MarijaS quickly updated her profile by setting up a nickname and choosing a country of origin. The rules then say that certain documents are required to speed up the withdrawal, especially if using Neteller, Skrill, credit cards or bank transfer, but our player didn’t upload any documents. 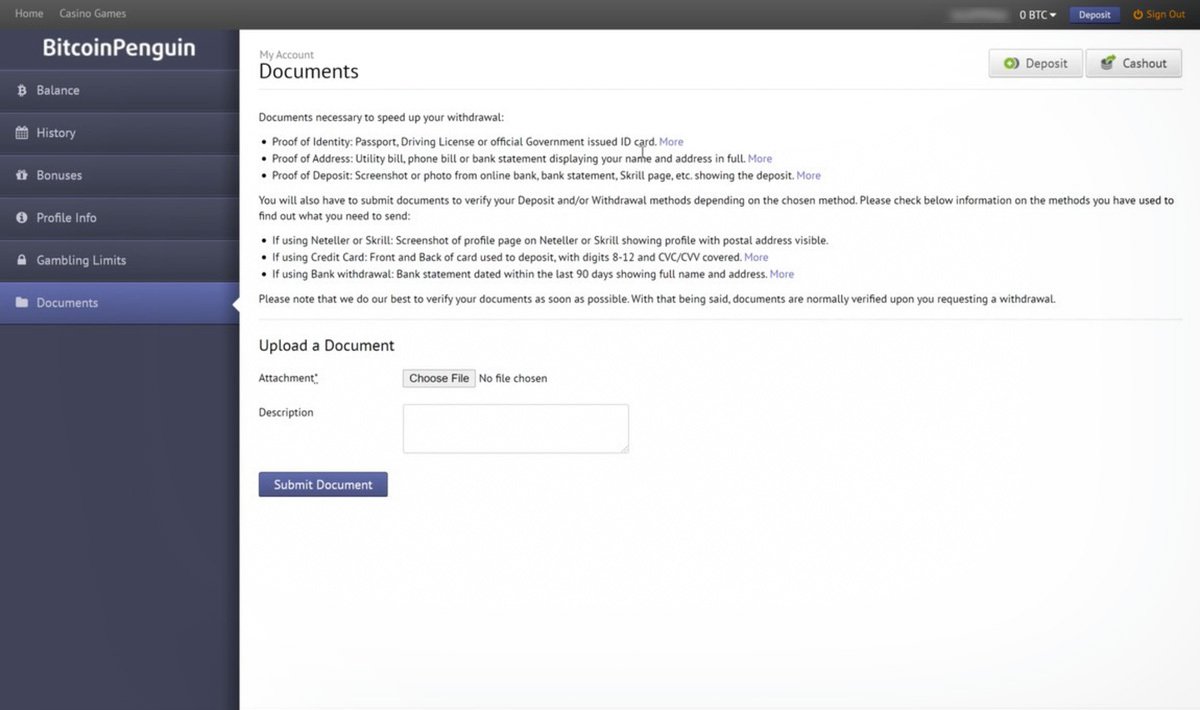 As there was no need to verify her identity, at least at this point, our tester picked Bitcoin to top up her newly opened account and waited a couple of minutes for the transaction to complete.

According to the cashier, the minimum deposit amount for BTC transactions is 0.0001 BTC, however the terms and conditions state that the minimum deposit limit for Bitcoin is 0.0002 BTC, or 0.0003 BTC for a deposit with exchange. Nevertheless, our tester had no issues in this regard, as she funded the account with $150 in Bitcoin, or 0.0024 BTC. 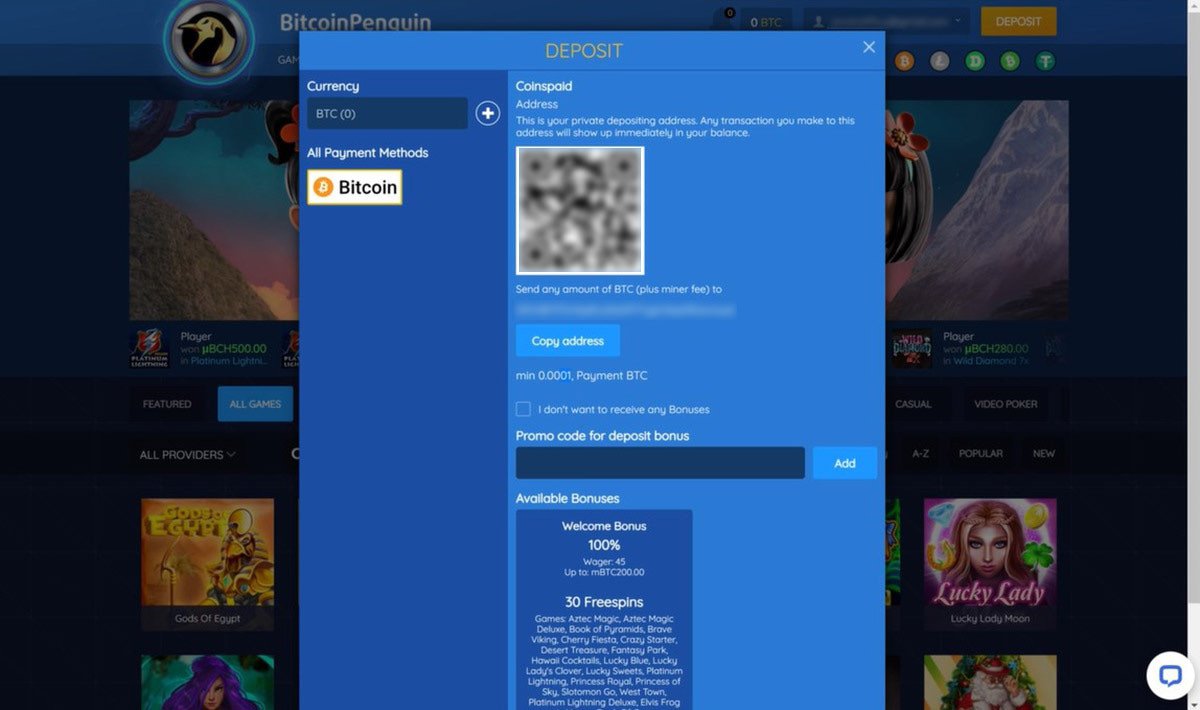 It took around 10 minutes for the deposit to process, allowing MarijaS to finally open the lobby and play her favorite games.

This place hosts a huge library of more than 900+ slots, giving our tester enough room to find a working game. 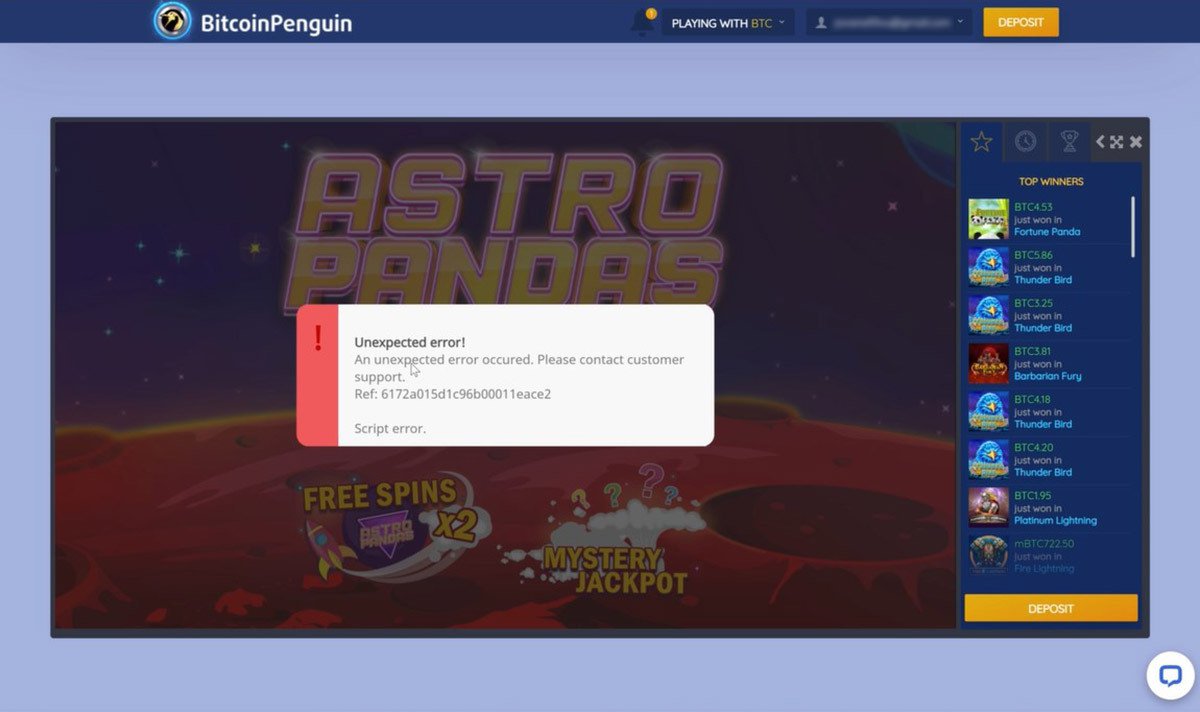 After making a couple of losing spins on The Ancient Four, MarijaS decided to look her luck elsewhere and gave Pirate’s Map a chance. It’s a last-year’s piracy-themed title with four jackpots, free spins and an infinite number of retriggers. 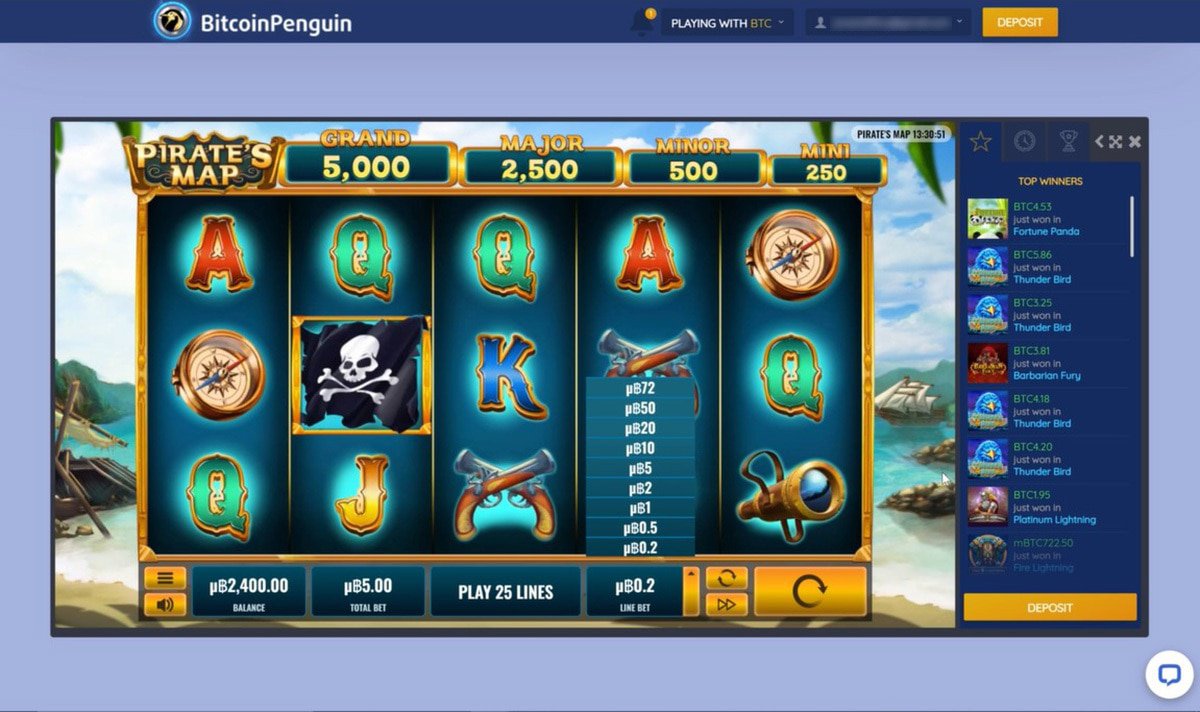 Getting the hang of it and reaching that 3x mandatory wagering requirement continued with Lucky Fortune Cat from Habanero. Meanwhile, going back to the lobby has revealed that titles from Booming Games always encounter an unexpected error or simply do not load. 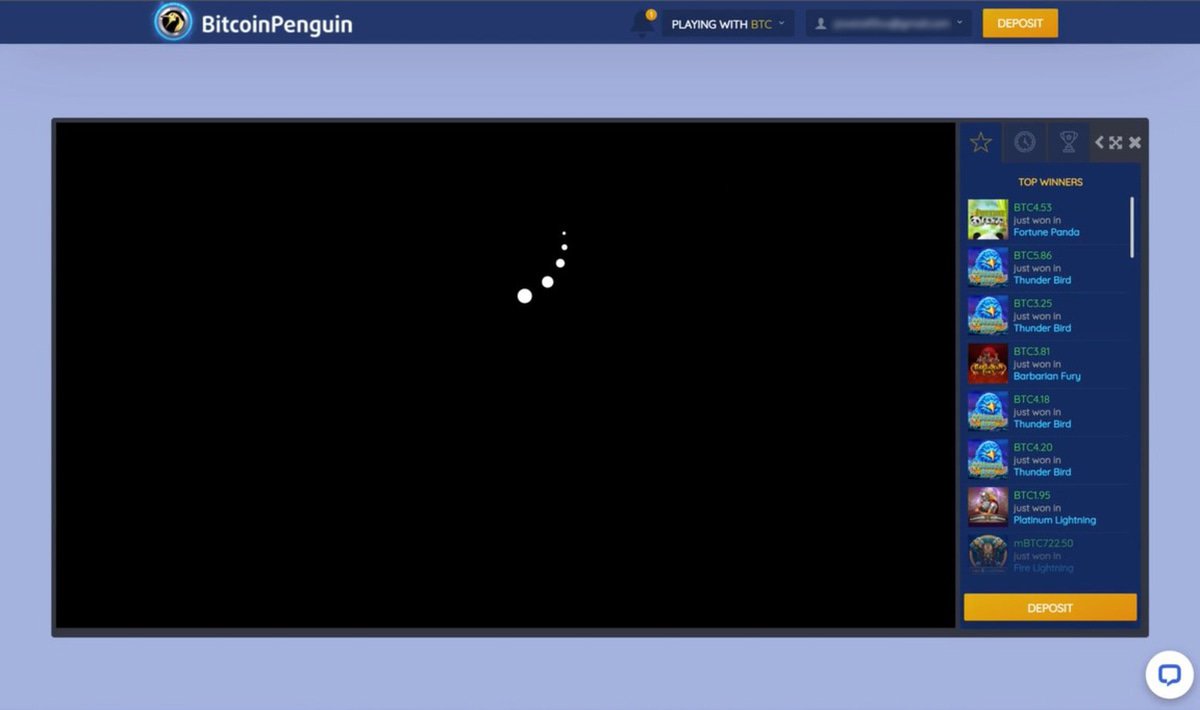 A barbaric win occurred on Barbarian Fury from Nolimit City which she played the longest, hitting colossal rewards in the range of $249.00 or more per single round several times! 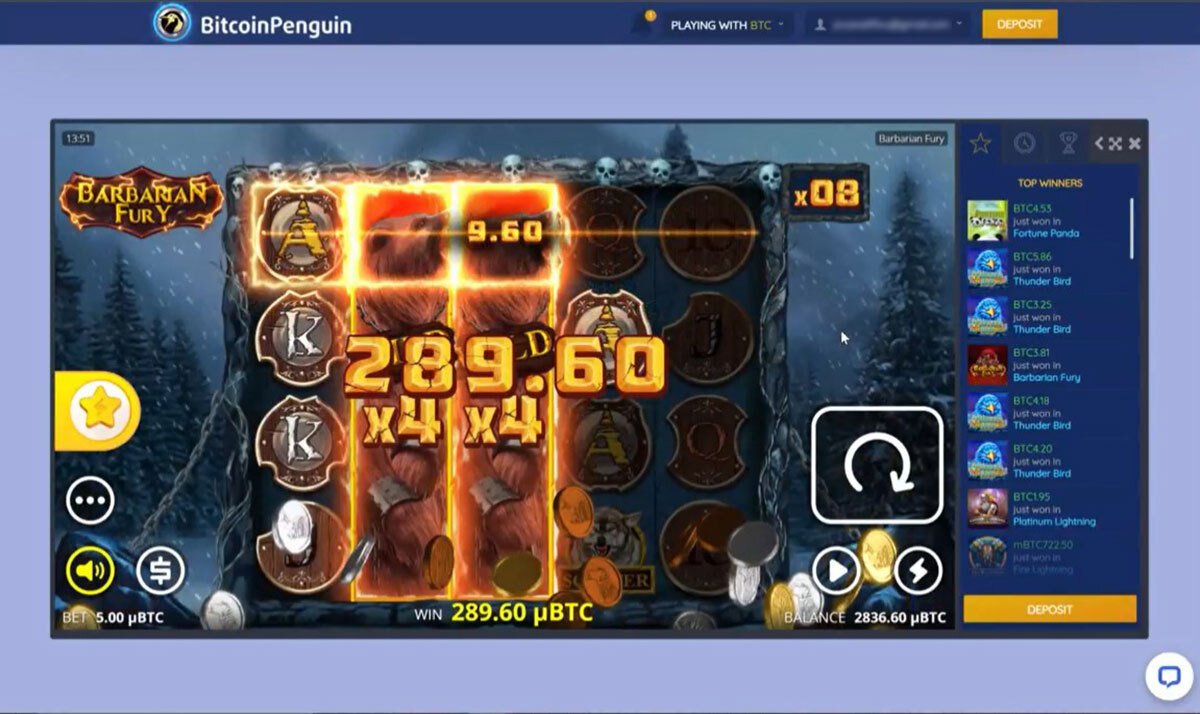 For a crypto-optimized library of slots, Bitcoin Penguin prides on a good selection of games, powered by more than 14+ software providers in iGaming.

The minimum withdrawal for BTC users is 0.001 BTC, and there are no cashout times announced by the casino – they do state that most withdrawals are processed automatically and that there are no standard ID checks necessary. 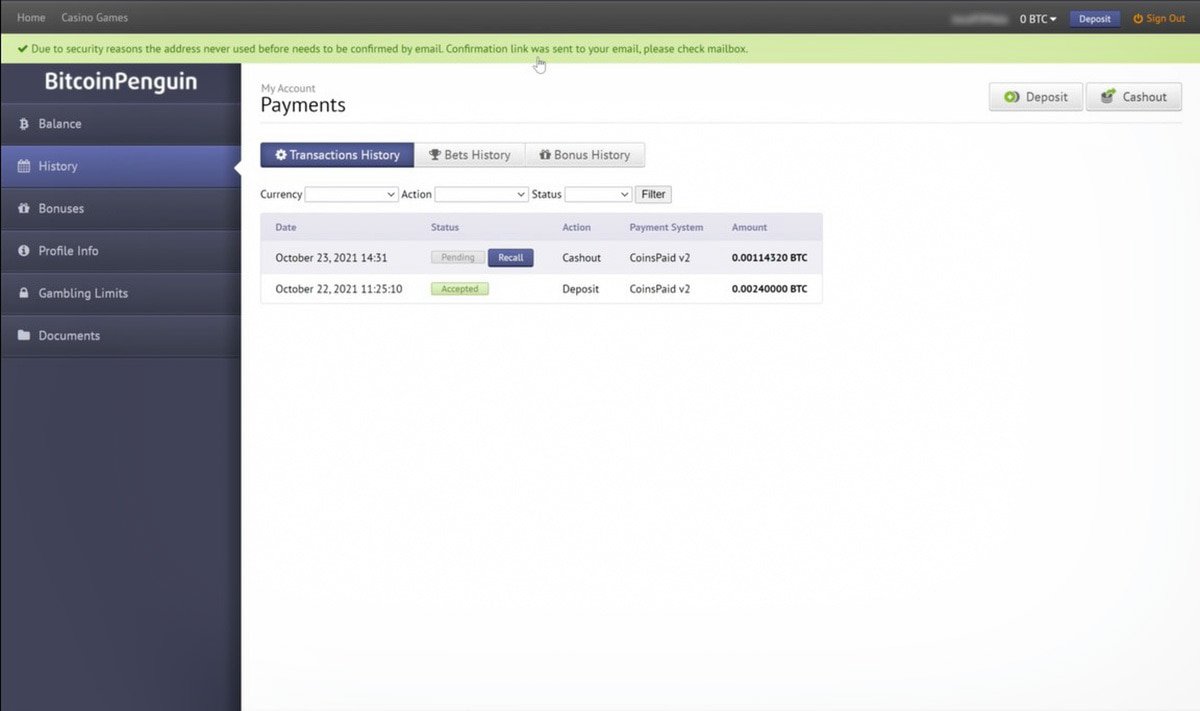 After submitting, the operator informed our player that a never-before-used address during a transaction needs to be confirmed by email prior to the payout due to security reasons. Hence, a confirmation link was sent to MarijaS email. 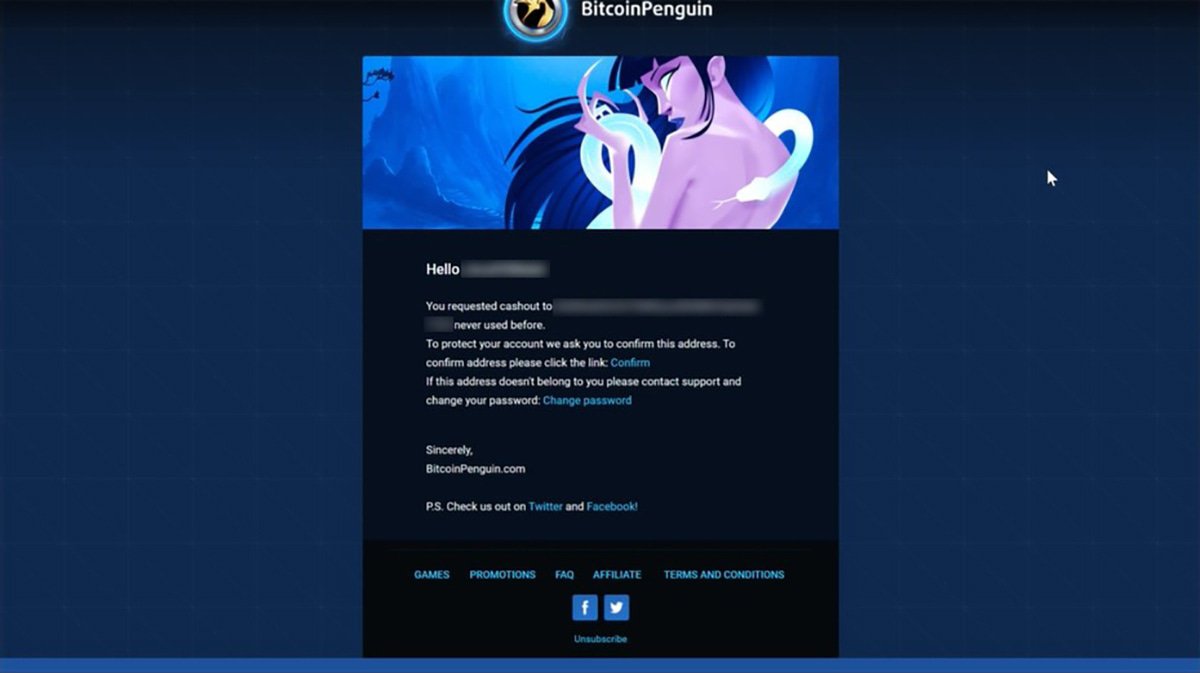 Couple of hours later, our tester was notified about the reception of money from an external Bitcoin account via Coinbase, 0.0011432 BTC or $70.15 (the final after BTC value fluctuations), which concludes the saga about testing Bitcoin Penguin Casino.

In a way, testing this brand was just like going to a dentist; you’re afraid of the unexpected on your way to the clinic, anxious when asked to be seated and relieved when everything is through.

We hope that our short survey of this place has fulfilled your expectations and provided valuable information. Please let us know what you think about this whole endeavor in the comments.

“Couple of hours later, our tester was notified about the reception of money”

Man apparently I need to get with the program because on the months Paul I had been voting for other and asking for bitcoin penguin to be tested and here it is their reviews there for the whole time lol since November apparently last year time I am yeah get with the program and pay attention what’s going on. And just like I said I knew they’ve been getting a bad rap because I’ve never had a problem there even to the point where my head is other accounts made or whatever and all they did was say I couldn’t receive bonuses Like deposit bonuses on my account because it was a duplicate and I already played and cashed out and everything that had a problem in like I’ve been worried a few times very small deposits getting extremely lucky and cashing out you know half a bitcoin and yeah they didn’t even try to deny it like other casinos will say any names “‘Eh’Em!”OSHI whose shady practices to this day have me angry and upset that they even get endorsed by this very site!! Anyhow got off subject, YAY! For BitcoinPenguin, good, honest, reputable casino, BOO for OSHI, shady, dodgy, not trustworthy thief, wolf in sheep’s clothing!😉😉

this is definitely an outdated and unfortunately also misguiding; of course i value your effort and i love your work! however, me and also few other people have been maliciously scammed by this casino - i fortunately only of a no deposit bonus winnings, but still. isnt there any chance that the casino expects you to be...

this is definitely an outdated and unfortunately also misguiding; of course i value your effort and i love your work! however, me and also few other people have been maliciously scammed by this casino - i fortunately only of a no deposit bonus winnings, but still. isnt there any chance that the casino expects you to be a tester? Or maybe the low withdrawal amount decided - would want toi seee how they behave if it was 2000$+ :) thanks anyway but i must have told the world about that this casino is a SCAM nowadays. beware!

It's good to see that the whole process went smoothly and that the player received the money within a few hours. However, Booming games do not load well and 3x rollover before a cashout is not something I will go for. This brand still needs to work hard to gain their reputation starting with acquiring the gaming licence...

It's good to see that the whole process went smoothly and that the player received the money within a few hours. However, Booming games do not load well and 3x rollover before a cashout is not something I will go for. This brand still needs to work hard to gain their reputation starting with acquiring the gaming licence and being more responsive when it comes to players' complaints.

Much better than I expected from Bitcoin Penguin, however, 3x wagering on the straight deposits rule and the fact that they don't have a license tells me it's better to choose some other brand to deposit and play.

Honestly, i expected there to be some difficulties in the whole process. For me, the 3x wagering requirement is too much.

The test went fine no obstacles or delays.  I am not a fan of the 3x mandatory wagering requirement for straight deposits, 1x is ok. Just wondering if it would be the same case for a higher withdrawal amount and KYC required :/

There should be no difference, the Cashier statement should be the same as the T&C statement regarding the minimum deposit amount for BTC transactions. Being on the LCB's warning list, I am pretty much surprised the process was running smoothly when testing Bitcoin Penguin Casino.