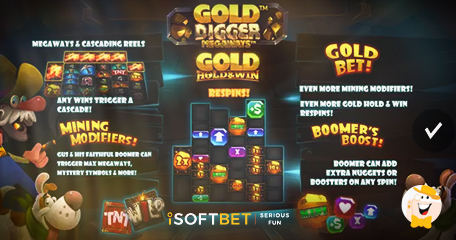 Blast Your Way to Underground Riches with Diggin’ Gus and Megaways!

The leading online games supplier and content aggregator with offices in Romania and Malta, better known as iSoftBet, is back once again this month to open up a brand new mine and present its latest sequel to one of th most popular titles in the roster – Gold Digger.

The follow up to a smashing hit is now called Gold Digger Megaways, and the studio’s prospecting hero, Diggin’ Gus, is ready to embark on an even greater adventure underground, as wins occur in minimum 10,000 ways on every single spin.

Accompanied by his lovable canine companion, Boomer, the celebrated prospector from iSoftBet is now tasked with mining on the Megaways engine with up to 117,649 ways to win. He is also capable of activating the Gold Bet feature to get a 50% increase in stake, which guarantees a minimum of 10,000 ways on every spin.

The studio’s latest title and follow-up to Gold Digger, is packed with a range of exciting features, including four mining modifiers that can be triggered randomly during base play. As a result, they award max Megaways, a mystery blast, Boomer Bonus Add or a Boomer Lose to Win, whereby each attraction brings huge winning potential to the player.

To top it off, five or more Gold Nuggets on a single spin will trigger the Hold & Win Respins. Even though the feature starts with initial three spins, it can reset every time a new symbol lands. During this stage, multicolored Reel Boosters can also appear and increase the reel size, boost all values in view, add extra lives or increase the win multiplier.

During the main highlight in Gold Digger Megaways, Boomer the dog can appear to add an extra Gold Nugget or Reel Booster as a special treat.

Outside of UK and other non-compliant jurisdictions, the Bonus Buy feature allows users to progress straight to the Hold & Win Respins round at a certain price.

Lastly, as one of the latest iSoftBet titles to be enhanced with BTG’s revolutionary mechanics, this follow-up comes right after Majestic Megaways and Aztec Gold Megaways, the company’s highly successful games in the series.

“Gold Digger became an immediate hit when we launched it a couple of years ago, and we are thrilled to welcome it back to our portfolio with more features and more ways to win than ever before,” concluded Mark Claxton, head of games.

To sum it all up, while Megaways helped the developer to utilize cascading wins in this game, the Hold & Win system and Reel Booster modifiers may also contribute to a greater potential.

Live with Sportingtech and Kaizen

At the beginning of February, the leading online games supplier and content aggregator, has also expanded its relationship with Kaizen Gaming, one of the fast-growing companies in Europe and Bulgaria. iSoftBet is live with its full collection of slots and entire aggregation offering in the country with Betano.

Sportingtech is also among the company’s partners who recently joined forces with the gaming platform by signing a deal to implement the studio’s content in the upcoming weeks and strengthen its position on the market.

This slot looks really good, iSoftBet did a good job. With these new collaborations, iSoftBet will increase its participation in many markets, which is the main goal for all providers.

The upgraded version looks even better. In fact, every slot with megaways is an instant hit!