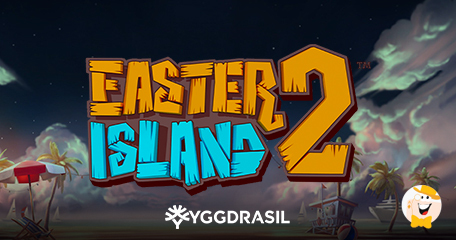 One of the world’s leading online gambling content publishers, Yggdrasil, has reignited the epic duo of Moai statues and heads back to another holiday to remember with Easter Island 2.

The stone duet and the bird sidekick are off to a trendy Venice Beach where they will be surrounded by sandy paradise with palm trees and parasols.

Vacation vibes are starting out early this year as Easter Island 2 invites players to chill, but not too much - because there will be exciting gameplay aplenty, along with massive winning potential.

This is a game with a return to player rate of 96%, medium volatility, and 25-55 paylines. The number of pay lines changes because in the base game, players bet on a 6x4 grid, which expands to a 6x8 configuration.

The six-of-a-kind win will trigger these expanding reels, while any winning spin will award the Symbol Swap Resin which sees the winning symbol replace all low-paying ones. It also increases win potential during respins.

Four, five or six wins in a row will trigger a colossal symbol - all bigger wins activate larger symbols in general. A wild Colossal Symbol lands on any spin that leads to huge cash prizes.

In Easter Island 2, players will encounter characters and symbols that they are already familiar with from the ever popular prequel. The game does come with updated graphics and theme, as well as a set of features that take it to a whole new level.

“The mischievous Moai are back and full of action. Every win triggers a respin which can lead to exceptional rewards. Watch out for a six-of-a-kind win which will trigger expanding reels. They’ll boom to a sky-high 8×6 matrix with 55 paylines which means not only more, but bigger wins. Features aside, the game’s layout has been designed with players completely in mind.

Heiskanen added that the company understands the players’ mobile-first, portrait preference, so they build the games’ UX around them.

Have a look at the official game preview!

You can also read LCB’s review of the game HERE.

“Yggdrasil, has reignited the epic duo of Moai statues”

I've just tested the demo, I like the music in the game and these two cute moais having fun when spinning all over again. We anticipate more Easter content to come in the upcoming weeks :)

A long-awaited sequel is finally here. Can't wait to try it :)

These Easter-themed slots are a lot of fun.