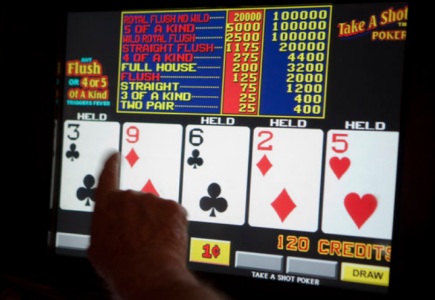 Video poker machines are being reintroduced within a select few bars and restaurants in Illinois.

According to the manager of a pizzeria in the Chicago suburb of Justice, three video poker machines went live at approximately 11:30 a.m. on Tuesday.

Chino’s Pizzeria manager, Jeff Glover says he witnessed the machines light up as he was cleaning up. The poker games became available rather than the standard "out of service" message that had been displayed for weeks. The machines are accepting cash and are available to play. Glover has had his eye on the poker machines waiting for them to fire up.

Another establishment in the city of Joliet also saw five machines go online on Tuesday. Alfonso “Izzy” Izquierdo, owner of Izzy’s Bar confirmed that they’re up and running.

The state of Illinois approved the placement of the video poker machines in 2009 to assist with the cost involved in a $31 billion construction program to fix schools, roads and a series of other projects.

The process was delayed reviews of license applications filed by the manufacturers, distributors and businesses or clubs that would house the machines. The delay drew on due to a lack of gaming board staff available to investigate and process these applications. Another contributing factor to the delay was problems with launching a central computer system to monitor 60,000 video poker machines around the state.

Comments either Governor Pat Quinn’s office or Aaron Jaffe, chairman of the Illinois Video Gaming Board were made but a representative from the board says a statement is in the works.
General Gambling News Casino Games Land Based Casino News Back to articles