Octopus Treasure Set to Become Another Triumph for Play’n GO 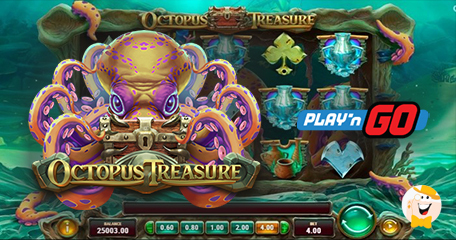 September 10th has been chosen by Play’n GO for the release of its 32nd title this year, Octopus Treasure. The industry’s busiest supplier isn’t showing signs of stopping when it comes to delivering hot gaming action and this slot is also packed with great adventurous features to keep all players entertained for a longer period of time.

Following the studio’s late release of Golden Ticket 2 and Jolly Roger 2, it is time to once again dive deep into the ocean and look for the long-forgotten treasures, jealously hidden and guarded by a giant octopus. Play’n GO is inviting its fans to travel down to the depths of sea in a standard reel setup with 20 ways to win and hopefully reach a massive exposure of 500,000 credits.

A Promising Line up

As reported by the software development company, Octopus Treasures is launched at an incredible moment for the industry and slot specialists. It follows the successful release of Golden Ticket 2, a long-awaited sequel to the immensely popular 2014 hit Golden Ticket, and it also enters the market right after obtaining the record third consecutive win at the 2020 Starlet Awards.

Play’n GO was awarded ‘Mobile Supplier of the Year’ for the third time running, which is a huge triumph for the company, giving it additional boost and strength for future projects. As one of the world’s top suppliers, Play’n GO is set to astound its fans with Octopus Treasure’s graphics, style and gameplay concept, as it reminisces traditional land-based games and features a streak of fast-paced, action-heavy attractions.

Chief product officer of Play’n GO, Martin Zettergren, shared his thoughts on the game and said:

“It’s obviously great to be recognised with an award, especially for three years in a row! It shows we are continually creating engaging, high-quality content, and that’s our goal. Octopus Treasure is another example of this. It’s packed with great features, is simple to play but has a lot going on to keep players entertained for longer, and that’s what they want.”

A Treasure Chest with 4 Features

The studio’s latest video slot after a streak of sequels such as Jolly Roger II and Golden Ticket 2, is played on a 5-reel, 3-row grid with 20 fixed paylines, triggering rewards from left to right. Its biggest attraction, Treasure Chest, activates 1 of 4 features once a key symbol lands on reel 3 and is matched with the treasure chest.

Players can either activate Wild Coins where they pick 3 coins to reveal which symbols will turn wild, Gold Pile where Octopus upgrades symbols for bigger wins, Treasure Grab with instant prizes or Wild Reels where an entire reel is filled with stacked wilds.

Ultimately, customers can land 3 scatters on reels 1, 3 or 5 and activate Key Re-spins. During Treasure Spins, each rotation plays a random bonus feature, where every new key symbol awards +1 spin. The number of these rounds is unlimited.

Among the upcoming titles in September from Play’n GO are also Celebration of Wealth, Beast of Wealth, Feline Fury and Temple of Wealth.

I put in some time playing this one today and thought it was excellent. I have to agree with the title of this article when it says it's set to become another triumph for play,n go. I guess only time will tell.