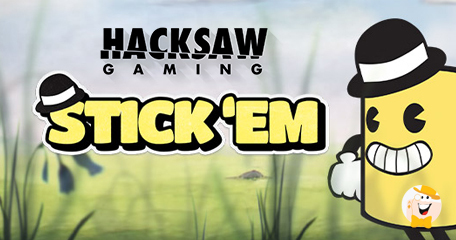 Is there a better way to celebrate the very first anniversary than unveiling the first-born slot game in the catalog? That’s exactly what Hacksaw Gaming did, introducing the thriving community with their pioneering digital one-armed bandit.

Following Canny the Can on an adventure, Stick ‘Em is a 5x4 video-slot packed with a selection of features such as sticky win spins, extra spins along with a collection of high paying symbols. The release is also equipped with a bonus wheel with three levels of progression.

Besides being the premiering slot produced in their workshop…

…this game is also the first title to boast upgraded music engine with dynamic progression. Referring to this melodious spice as a “nice little added extra for the player”, the team wanted to enhance the consumers’ experience and offer something that will "shake up the industry."

Commenting on the debut creation, Marcus Codes, COO at Hacksaw announced as follows:

“We’re delighted to release our very first slot today after being exclusive with Leo Vegas for the past 2 weeks. We have seen fantastic numbers and feel Stick Em will be a great hit within the industry. There is more to come from Hacksaw, this is just the beginning.”

…the group of enthusiasts gathered in a team led by the idea to rethink classic products that are currently in the market. Focusing on the 'mobile-first' approach, the developers utilized the technology and design with users in mind aiming to deliver an as best and personalized experience as possible.

At the time being, their collection hosts 27 scratch card games available to play with winnings of up to €500,000. What characterizes all their products are high jackpots and dynamic gameplay.

A tightly-knit team of experienced game designers, developers, and entrepreneurs…

… is located in Malta and Stockholm. By carefully combining data insights, knowledge and creative thinking, the team manages to retain old customers and find new ones smoothly and quickly.

Among the successful alignments with top-performing brands form the industry…

…Hacksaw has teamed up with Videoslots. Under the terms of the distribution deal, selected titles from the studio’s suite of releases will go live with the operator’s platform. As projected in the agreement, the rest will be added gradually.

Another aggregator to announce the cooperation with the “young and ambitious studio with strong potential” was SOFTSWISS. The partnership with a provider of top-of-the-line White Label and online casino platform services will speed up Hacksaw’s expansion globe and industry-wide.

I never heard anything about Hacksaw gaming. The first impression is kinda nice. I like the animations and colors of this slot game. That's why i love LatestCasinoBonuses News section, you always can be surprised with something great. If this is just a beginning , than i cant wait for their next slot.

Wow, this is a wonderful achievement for the young studio, congrats!