PlayStar has been in operation since 2015 and they have quite a collection of slots to show for it. The company is situated in Taiwan, so you can expect the games to draw a lot of influence from Asian themes. Other common factors include high wins and high volatility, jackpots, different payline structures and great graphics. 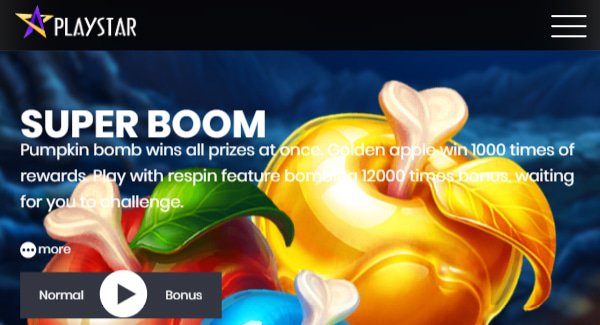 This company is heavily concentrated on the Asian markets, which is obvious from the occasional broken English use in marketing materials (don’t worry, the games are proofread properly). They have been steadily expanding, including to mobile markets, and it’s only a matter of time before they expand their market scope as well.

Not just slots and jackpots with big wins...

You won’t find many classic slots in this collection. Whilst the games themselves mostly come with the traditional setup of five reels and three symbols positions per reels, the multitude of gameplay functions and paylines differ wildly from one game to the next. For example, the paylines can come in singulars, dozens, hundreds, or in different formats such as the 243 ways to pay.

When it comes to wins these games clearly aim for high basic wins, complemented by massive bonus wins through different special features. Jackpots are not present in every game, but those that do have them tend to aim quite high. One can certainly fill his pockets with coins, should the perfect spin occur.

It’s not only slots that PlayStar produces. They also have their own line of fishing games, which is a strange combination of gambling and interactive video games. They also offer a selection of card games.

Besides concentrating on producing slots the company also makes sure that their technology is up to date. This means that they spend considerable resource finetuning the interface, with the games also taking advantage of HTML5 technology to make sure that everything runs on mobile devices. For the player, the biggest advantage is all the work and expertise that doesn’t show up on the screen. Different mathematical models, bonus systems, easy integration for online casinos, app design and constant work on graphics means that constant innovation goes on behind the scenes.

No current license information is available. Taiwan itself has quite strict gambling laws, but as the company doesn’t run gambling sites these do not apply (as is the case with most gambling game producers). Thus, as always, you need to choose carefully which site you play in.

The games themselves have been tested by BMM labs and GLI. These are probably the two most trustworthy authorities in the business, which guarantees that the games are safe and sound.

PlayStar is one of the world's most commonly used online software providers. No shocker there but did you know that there are 35 featuring these games listed here on LCB? In fact, the general consensus among you after 1208 votes, is that these operators have earned an average rating of 3.2 out of 5 making it one of the most preferred in the industry. Another 56 votes from our members on the 7 slots we've reviewed have resulted in a 2.76 average rating.

PlayStar has been in operation since 2015 and they have quite a collection of slots to show for it. The company is situated in Taiwan, so you can expect the games to draw a lot of influence from Asian themes. Other common factors include high wins and high volatility, jackpots, different payline structures and great graphics. This company is heavily concentrated on the Asian markets , which is...
Read more